The first shop I noticed when arriving in Dillon over two months ago was the Gun, Gifts, Toys and Souvenir shop. It has a wooden exterior and a name which strikes me as both comical and terrifying at the same time. These items being sold alongside each other is most bizarre. Following this, I saw guns being sold in all the petrol stations and hardware stores. The concept that anyone can just go into a gas station and buy a gun amazes me. As long as an individual does not have a criminal record and is over the age of 21, they can sign a form, pay a fee and then be a proud owner of a new gun. In Montana people carry guns around with them for protection against people, animals and even the government. To me, holding a gun drawers danger to yourself (this is what I have learnt in the UK – where guns are illegal) but here owning a gun is almost a necessity and a safety blanket. In Dillon itself there seems to be little or no crime. We leave the car unlocked whenever parking in town, with the keys still in the car. Anyone could hop in and drive it away but they never do. No one here locks their house, but yet there are no squatters. People here have never even heard of squatters. Is this because people know if they trespass or steal they will be shot. Yet in cities where guns are also legal, there is still crime. I am not sure if guns do equal less crime. Also there is the detrimental issue of people misusing guns and not being taught how to use them safely. There are numerous horror stories about children getting into their parents gun cabinet and having fatal incidents. School shootings are also a pressing issue, would these still occur if guns were illegal?

Nonetheless, guns are a part of American culture, people use them for sports, hunting and as a weapon of self defense. So, I figured it was time for me to embrace the culture, overcome my fear of guns and learn how to shoot properly. Yesterday it was Columbus day so we had the day off work. What better day to try shooting than on the holiday celebrating the discovery of America?

To begin with, I learnt how to shoot a pistol at a target around 40 feet away. My aim was very off to begin with and we later discovered this is because I am left-eye dominant. So I started holding the gun in my left arm and managed to get the target – result. 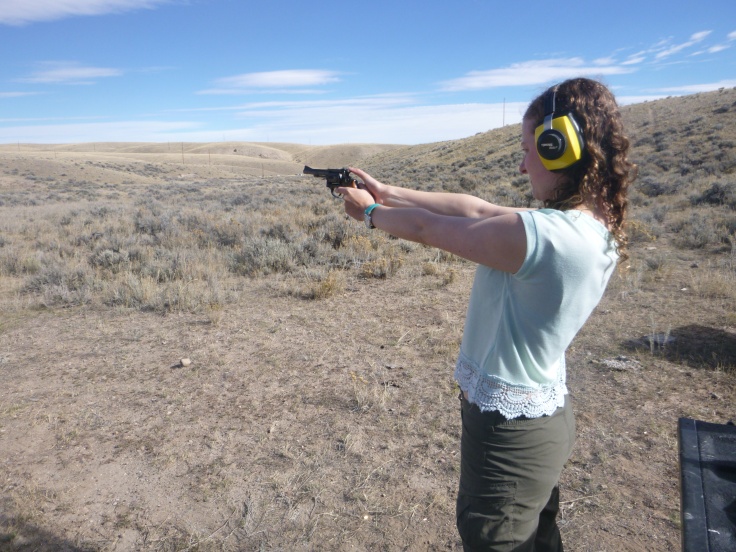 Shooting the pistol was surprisingly fun and hitting the target was so rewarding. Lining up the gun with precision proved to be quiet a skill and maintaining a steady grip also seemed pivotal.

Next it was time to use the riffle. This was also great fun. Using my left arm and eye again seemed to do the trick.

I also tried lying on the truck to shoot the riffle.

We also used an even bigger riffle from sitting on a bench. This I did not enjoy, when I pulled the trigger my entire body shock from the kick back. It was too much for me. So I went back to using the pistol and riffle which was much more my thing.

I think the best way to get over the fear of guns is to use them. While, I am still not 100% comfortable with the idea of guns around at least now I know how to use them and a little about how they work.

Currently, it is bow season, meaning people go out in camouflage and hunt for deer with a bow and arrow. So I also practiced my archery skills on a target too.

However, scary guns are, when used properly they can provide a rewarding, skillful and even enjoyable sport.