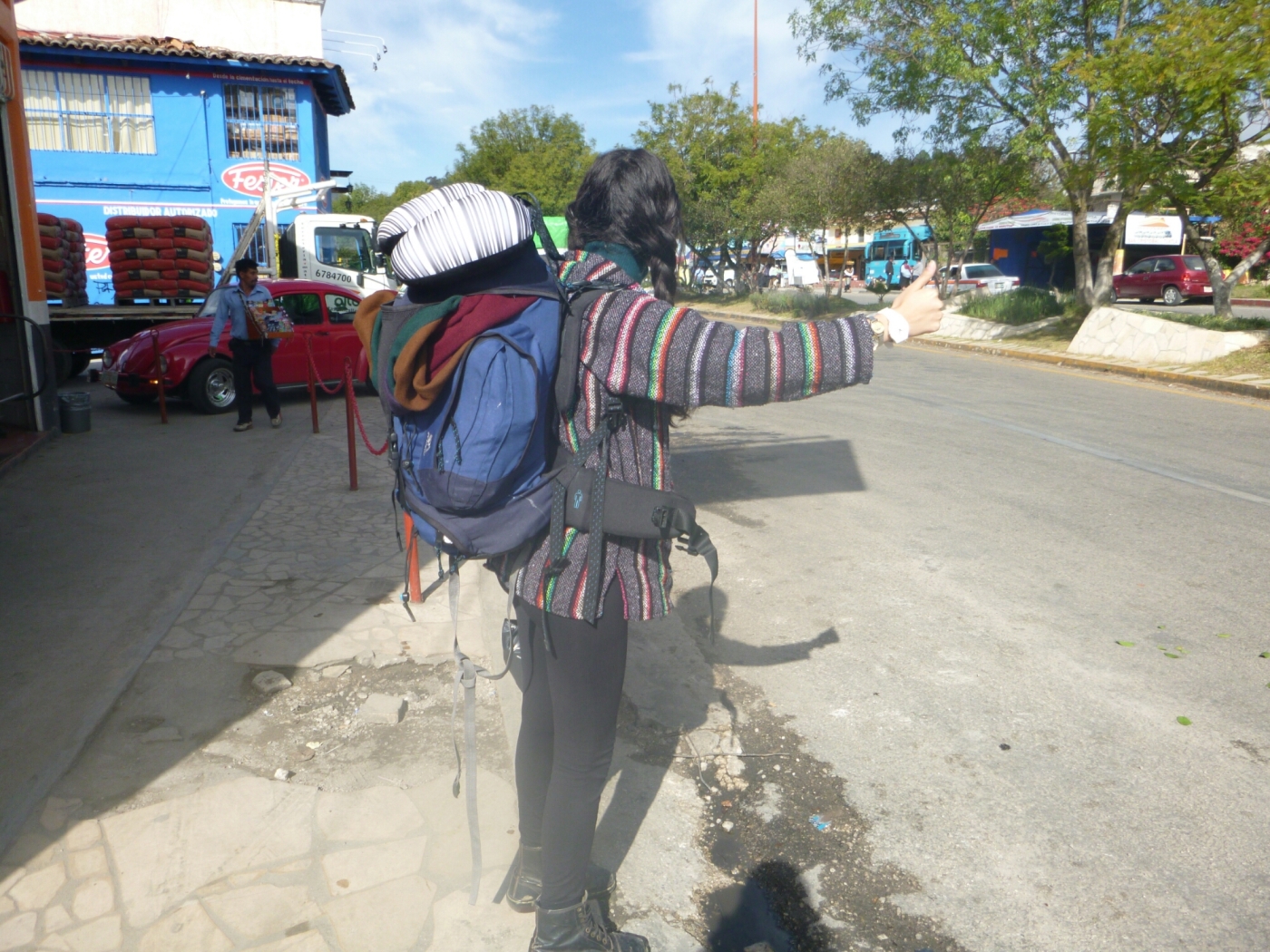 Through the grapevine I heard about a secret yoga community living in the depths of jungle who provide cheap accommodation and yoga classes to those who manage to find them. The guy giving our yoga class in San Cristobal told us about this magical gem. My friend and I decided to try and find them. We asked our yoga instructor for some detailed directions and he gave us a vague idea of where it was and then said, ‘if karma wants you to find it you will’. With this in mind we set off the next day. 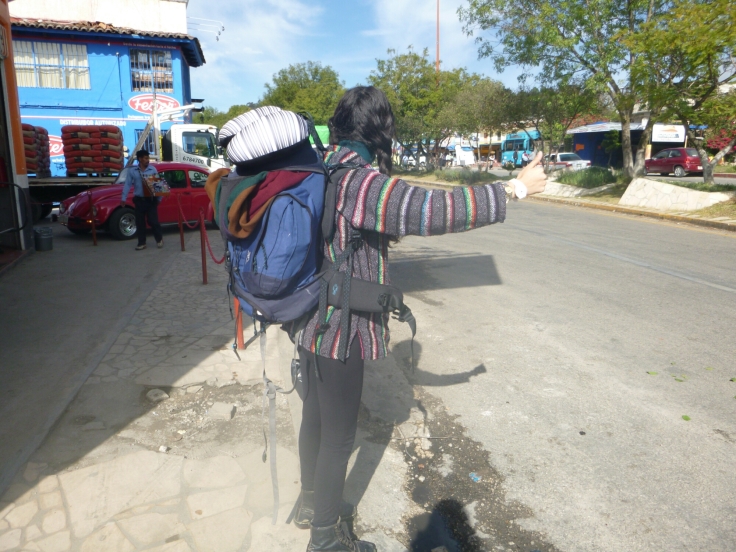 Numerous people had told us that hitch hiking from San Cristobal to Palenque was manageable in 7 hours. Neither of us had ever hitchhiked before and we were up for the challenge. We stood on the correct road with an outstretched arm and thumb up. Lots of people made eye contact, waved or just laughed at us with our huge rucksacks. We had no idea what we were doing, where to stand or who to trust. All we knew is that we needed to get into the national park jungle in Palenque before 4.30pm otherwise the gates would be shut. After an hour of standing in the harsh sun it was time to give up and take the bus. I was proud that we tried but ready to sit down and take my pack off. We took a communal taxi followed by another taxi bus. Driving through the forested mountains was incredible. The hills rolled on for want seemed like n eternity. We stopped in many poor mountain villages to pick up and drop off passengers. Each time a young child or adult would pop their head round the sliding bus door and try to sell some food (plantains or sandwiches). The scenery was beautiful and the houses so basic. Huts with corrugated iron roofs homed entire families. Along the road children sat, playing and watching us pass. I wondered why they weren’t at school or indeed if they had a school they attended. It is such a different way of life in the Mexican mountain villages, the struggle to survive was really apparent.

We arrived in Palenque bus station at 4.10pm. Neither of us stressed too much on the bus ride because as we were told earlier – if it was meant to be karma would guide us to this community. However, getting off the bus we suddenly had an urge to get there. We ran around asking people where la jardin (yoga home) was and no one knew. So we took a bus into the national park next to the ruins. From here we asked again and still no one could help. So we started to tentatively follow the vague directions given by our yoga teacher the previous night (which we didn’t write down of course). We turned right at the ruins museum, walked along a dirt road through the humid rain forest, crossed a bridge and then followed the road up a hill. 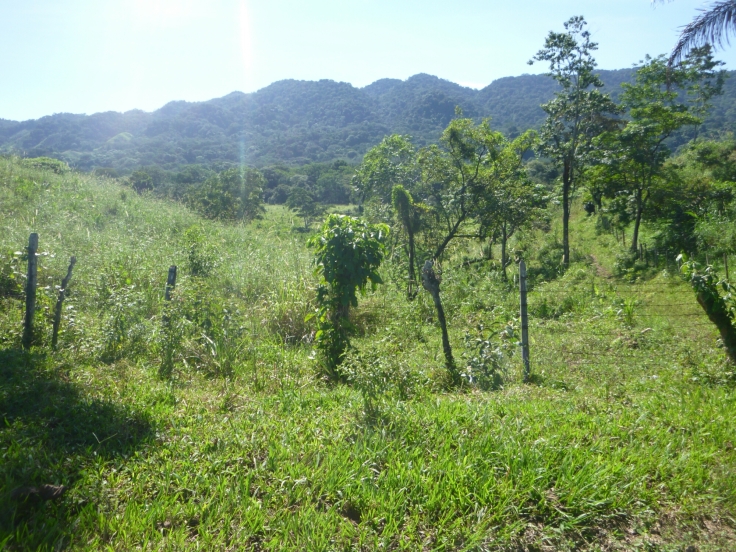 Luckily my friend had 3g and we found our yoga instructors number online. Karma was on our side – he picked up. We then knew what we had to do. We found a gap in the barbed wire fence crossed it, and walked right along the field boundary. We came to a crossing went left and a little while later found the gate to our new home for the next few days. 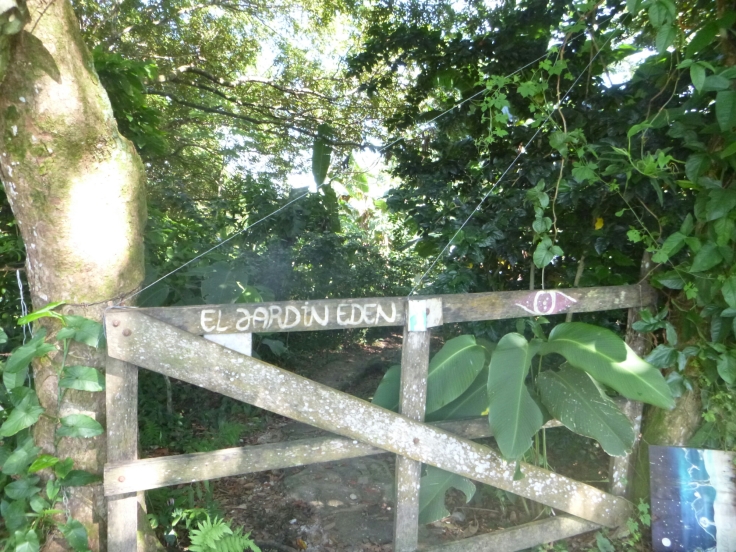 We made it just in time for a cacoa ceremony. We were covered in sweat but were led straight to the temple. It was a lovely structure made of owaska vines (shamen plant). 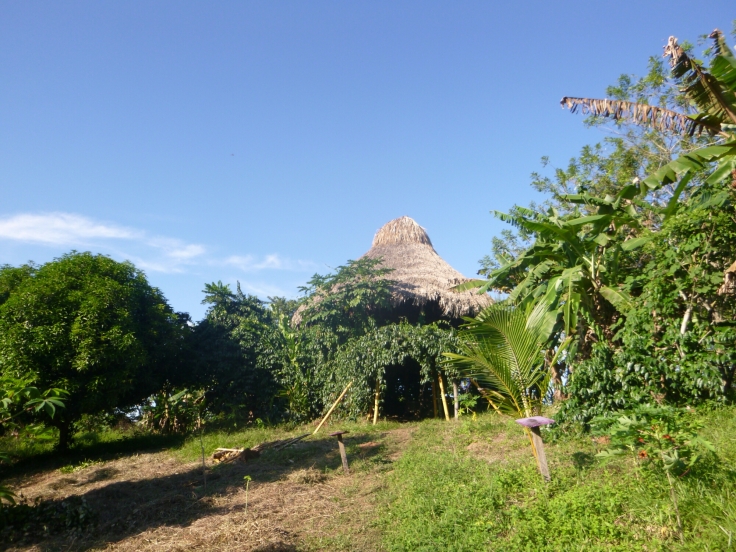 The moment we sat in the circle of around 11 people we were greeted with hugs. It was so overwhelming, after such a long journey these strangers gave us the warmest welcome I have ever received. They were so happy to have us and treated us as family. I almost cried, how could people you don’t know be so kind and accepting? Next, we were given cocoa treats which they had made during the day and drunk some hot cocoa. It tasted pretty good – rich chocolate. They sung traditional yoga songs, played the guitar, danced around the fire and we had a pleasant evening. It certainly was very different to anything I have ever experienced. It was a great space where no one judged you and individuals moved in unison to the music.

At 9pm we were shown to our room. It was an incredible cabanya overlooking the rainforest. Lieing in the mosquito net, I could see shadows of the trees in the forest, hear crickets, birds and howler monkeys and feel the warm air against my skin. After discussing with my friend the crazy place we had landed in, I slept very well.

I woke up to the chiming of a bell three times at 6.30am declaring it was time for meditation. I walked through the rain forest down an intricately crafted stone path to the temple. Where I grabbed a yoga mat and sat down looking through the wreathed roof at the magnificent trees. After probably 30 minutes it was time for some yoga. It was a great session, quiet strenuous but a perfect way to start the day. It had been a while since I had a good shower and the pond near the temple sounded like a good idea. I jumped in, felt amazing, got out and realised the pond’s colour. It was a murky, muddy brown. On the plus side, it was time to sit around a wooden crafted table to eat a hearty porridge breakfast (which I haven’t had for so long.) Unfortunately, the bench I was sitting on had been eaten by terminates and so it snapped and we all fell to the ground. Over breakfast we discussed the yoga karma tasks for the day. My friend and I decided to shovel cow pat for fertiliser. Everyone seemed to say we should look out for mushrooms as they tend to grow near cow pat. It seemed to be a joke but quiet serious at the same time. This yoga community, were not just into yoga it appeared – but also ‘medicines’ (natural drugs).

Nonetheless, we decided to go to the ruins for the day, seeing as they were not too far away. We walked there and roamed around the museum and the ancient site. It was fascinating, the artefacts were around 1,400 years old but in such great condition and stunning. The ruins were situated amongst the trees in the forest. They were tranquil, stunning and very interesting. While we laughed at the intensity of yoga the community, we found ourselves chanting Shanti, Shanti, Shanti at the top of these ruins – getting some strange looks. 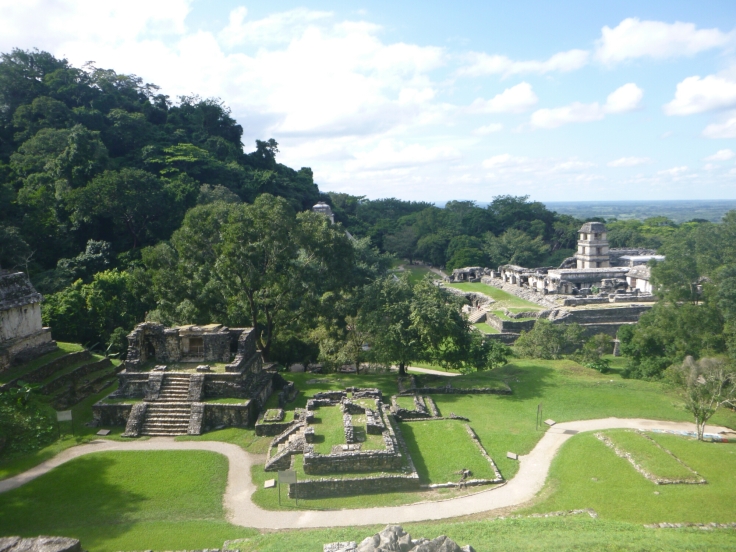 To cool down I sipped on some refreshing coconut water. 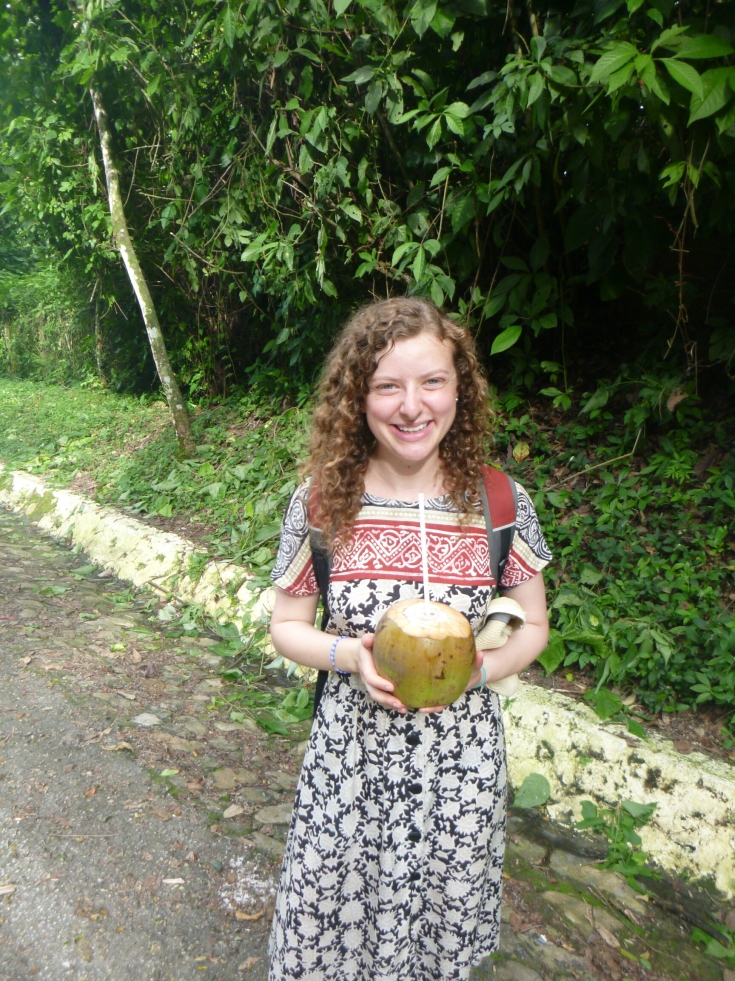 On exiting the ruins we bumped into our yoga friend who told us about some quiet water falls we should go to. We found them and jumped in. It was so refreshing to be emerged in crystal clear, cold water, surrounded by the shaded forest canopy. It was so much fun. A while later a man started shouting at us to get out. Apparently, swimming is not permitted. We later found out we went to the wrong waterfall – this one was a tourist visiting point. Probably not the best place to jump in. Nonetheless, I was not bothered, it felt so good to cool off. 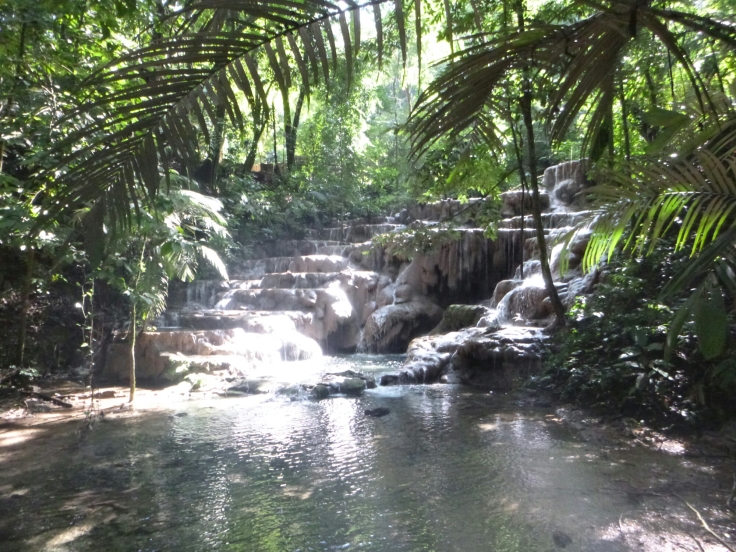 We made it back to were we were staying in time for sunset. Sitting on the swings while darkness descended was great. By this time we and everyone else had forgotten about our cow fertilising task – no bad thing. Dinner was a tasty chickpea, rice and tortilla dish. After this, I lay on my back and watched the sky which was carpeted in stars. I saw the most shooting stars in one night that I have ever seen before. I made so many wishes, one of which is to know more about constellations.

The same ritual occurred on our second day, the bell at 6.30, meditation, yoga and then breakfast. Following this we went to the right section of waterfalls. Here we found a group taking magic mushrooms. It was so strange to see so much yoga and tranquility surrounded by all these drugs. Everyone I spoke to, told me about their experiences with these natural herbs and how their love for mother earth was amplified. All the talk of drugs just worried me and the thought made me anxious. I did not try anything, I was happy enough to be in such a beautiful place and figured it wasn’t fitting to ruin my experience with hallucinations. The guy who founded the yoga community 13 years ago took owaska (the strongest shaman drug) and from this experience was told that he should buy the land and set up the establishment. This is what he did and it has been running ever since. Other people living there had come for a few days and had ended up staying there a year or months. There were four other short term guests, who were staying a week or so. Seeing as I didn’t want to try the mushrooms or drug ceremonies I decided two days was enough. While the way of life was great, relaxed and the community so welcoming I could not live like that, so secluded from the outside world and where the drug subconscious and reality seemed confused. It was a place where shoes, clothing and western ideals were not obligatory, an area to be yourself emersed in nature and somewhere to find comfort in mediation and yoga. While it sounds peaceful, I am happy to be on the road again, on a quest to find a real shower, some civilisation and preferably some spa treatment. 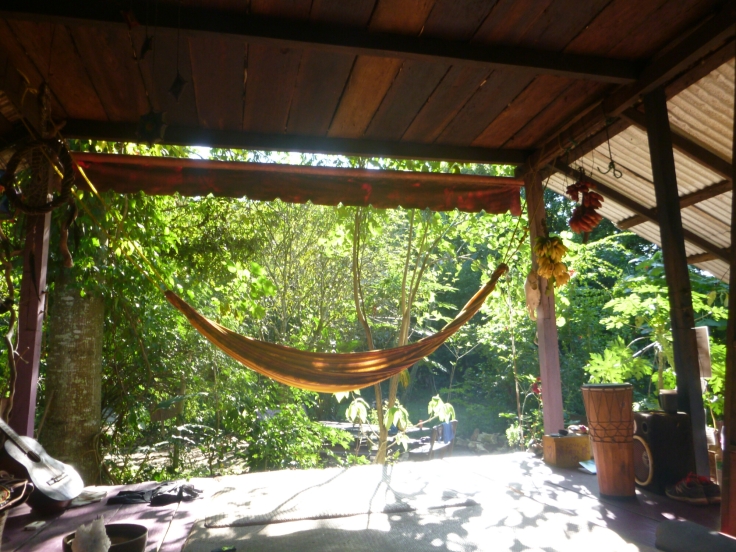