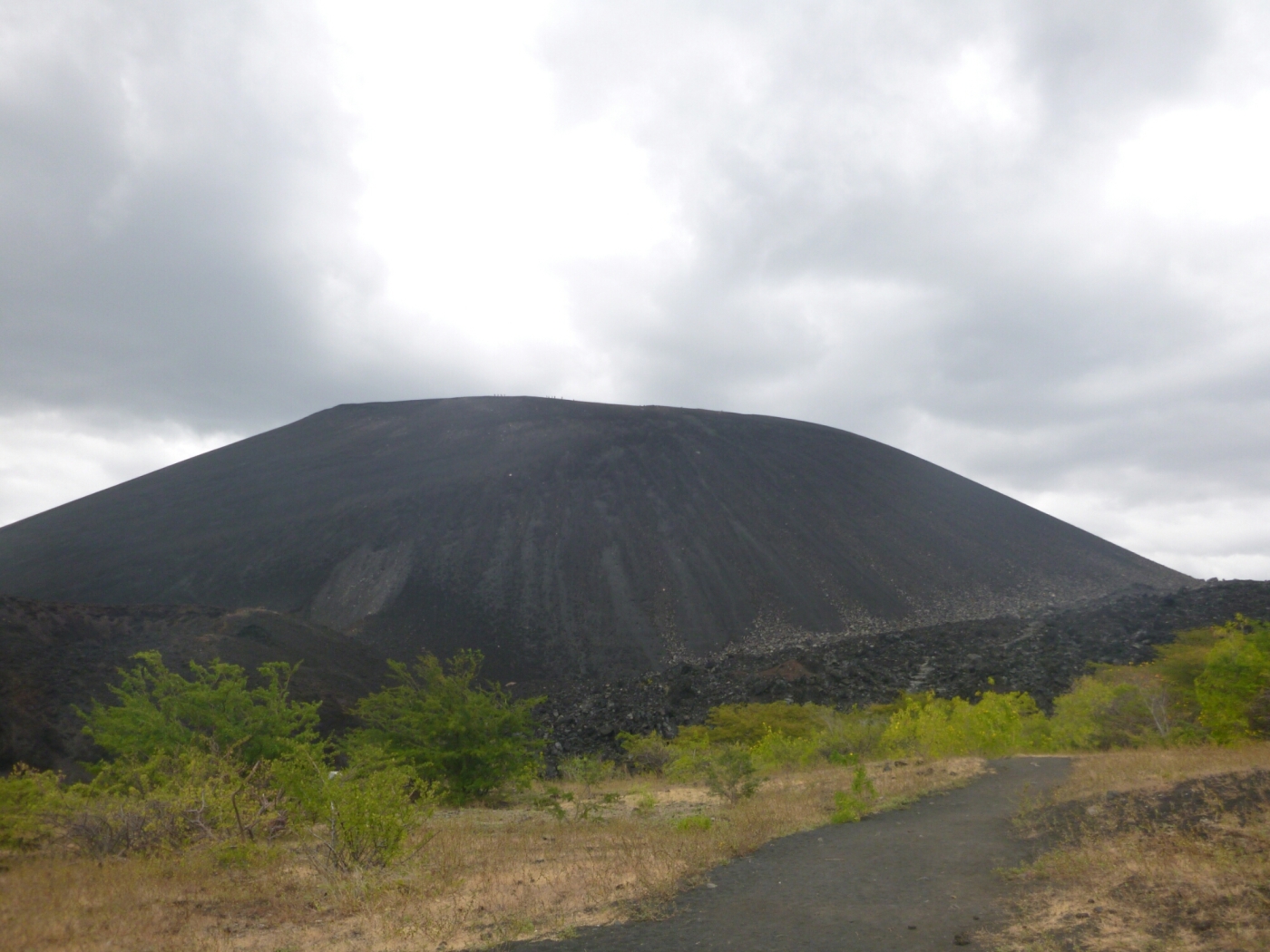 Cerro Negro is the only volcano in the world that you can surfboard down and globally it is the second youngest volcano in existence. Leon – where I am staying is just an hour bus ride away. Consequently, it seemed silly not to sign up for a volcano boarding adventure. Previously, the record was set at 90km per hour speeding down on a wooden board, which took the grand total of 13 seconds. A crazy man also biked down the volcano at a speed of  225km per hour. His bike hit a rock and was broken in half. Regardless, of having to be saved by a helicopter, some nasty injuries and a lot of physical pain, he lived to tell the tale and went on to do some other crazy acts. I made a decision to take this volcano boarding sport with caution. I would do it at my own pace.

The drive to Cerro Negro was bumpy to say the least. Five of us crammed onto the back of a worn down truck. On arrival we glanced at the grand, grey, geographical wonder and began the arduous climb up. It took around an hour and was 5 km far. While, the walk was very manageable the heat was pretty strong. It was one hundred percent worth it for the surrounding scenery which was phenomenal. We were blessed with a blue, clear and cloudless sky – you could see for miles around us. Volcanoes, mountains and hills shaped the landscape. Some were covered in forests, while others were white from being coated with sulphur. Many colours were present, red iron rich sands, chocolate brown mud and dusty grey volcanic ash.

Reaching the volcano’s ridge we were greeted with furthermore spectacular 360 degree views. We were able to see many craters from the top. A couple of which were giving off sulphur steam. Feeling the gravely sand with my hands I felt a strong heat. If the  left my hands there any longer than a few seconds it would have burnt me.

Walking along with the wooden sledge boards attached to our rucksacks was tricky at times. I felt as though the board was my wings and I was being pushed along, almost flying.

We reached the point ready to slide down and suddenly the fear kicked in. I had heard about lots of injuries, broken bones, scratches and scrapes – I was desperate not to hurt myself. Yet, when the choice was presented to me to go down the slow way or the fast route, I figured I was only going to be there once and the fast option was the only obvious answer.

There I was sitting on a wooden crafted board, holding onto a small piece of rope, ready to push off and jet down the side of a volcano. Absolutely mental. Before I could count to three I was off. Gravel and sand flew around me. I could not see much through my blurry goggles – in hindsight a good thing. It did not feel like I was going too fast which was reassuring and I sort of got into the swing of it. When I realised how steep the edge of the volcano was, my heart raced faster. Before I knew it I was at the bottom having completed my first ever volcano boarding adventure.

Looking at the volcano on the walk back to the truck, I realised how huge it actually was. We boarded down an extremely steep, large and scary volcano. What an achievement.