A hearty maple syrup pancake breakfast set me up for the day ahead – not that it was a particularly strenuous one. My new group of friends and I walked to the little town square to grab a chicken bus to a fresh water, transparent lake named ‘Eye of the water’. Transport on the island of Ometepe much like the rest of Nicaragua is very slow paced and somewhat unreliable. We waited some time before finally getting on the bus and arriving at the said destination. It was certainly worth the wait. On entering the site there was a sign claiming the water to have healing, mineral properties. Regardless, of the scientific validity of this I always enjoy reading and hearing about the mythic powers places hold. The lake itself was stunning surrounded by georgeous jungle trees.

I jumped in letting the water cool me down. It was the perfect thing for the hot weather. As I sat on a wooden chair drying off, admiring my surroundings, I saw a handful of howler monkeys swinging from the trees. I was relived to see that us humans had not completely scared away nature.

I also bumped into some other friends I met a while back in Leon, Nicaragua. It’s funny how you see a bunch of familiar people all of a sudden. I guess it’s pretty common on the gringo trail – particularly in these must see places.

After a relaxe by the lake it was time to change chilling destinations so we walked to the island’s little beach.

I had to keep reminding myself we were on a volcanic island surrounded by a lake and not the sea. It was deceiving because you could not see any land in the distance and the lake had white waves which gently swayed onto the sandy beach. We had to be careful as supposedly there are lethal bullsharks that swim around in the lake. It was a tantalisingly stunning spot with the dramatic volcano in the background. To think that the island used to be sea and not exist is phenomenal. Now it is home to 38,000 residents, who survive through agriculture and tourism. 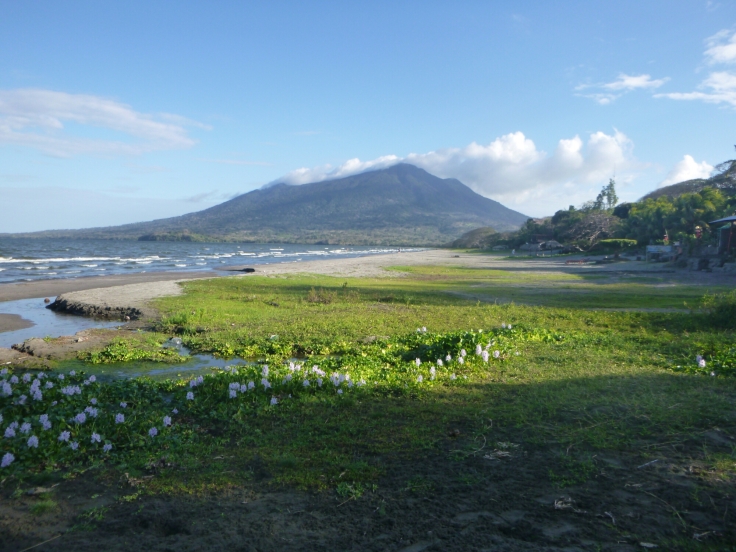 We stopped for a fresh fish lunch, which was very tasty. Of course it was served with rice and I chose the typical fried plantains (my favourite central America delicacy). It was a fantastic meal. We were lucky enough to have a great view while enjoying our tasty food. The beach was very tranquil.

When we were ready to leave we waited some time for the bus – which did arrive and we made it back to the hostel for a relax and early night. While the day itself was far from intense, we all decided that traveling for so long really catches up with you and a good night’s sleep is the best thing.