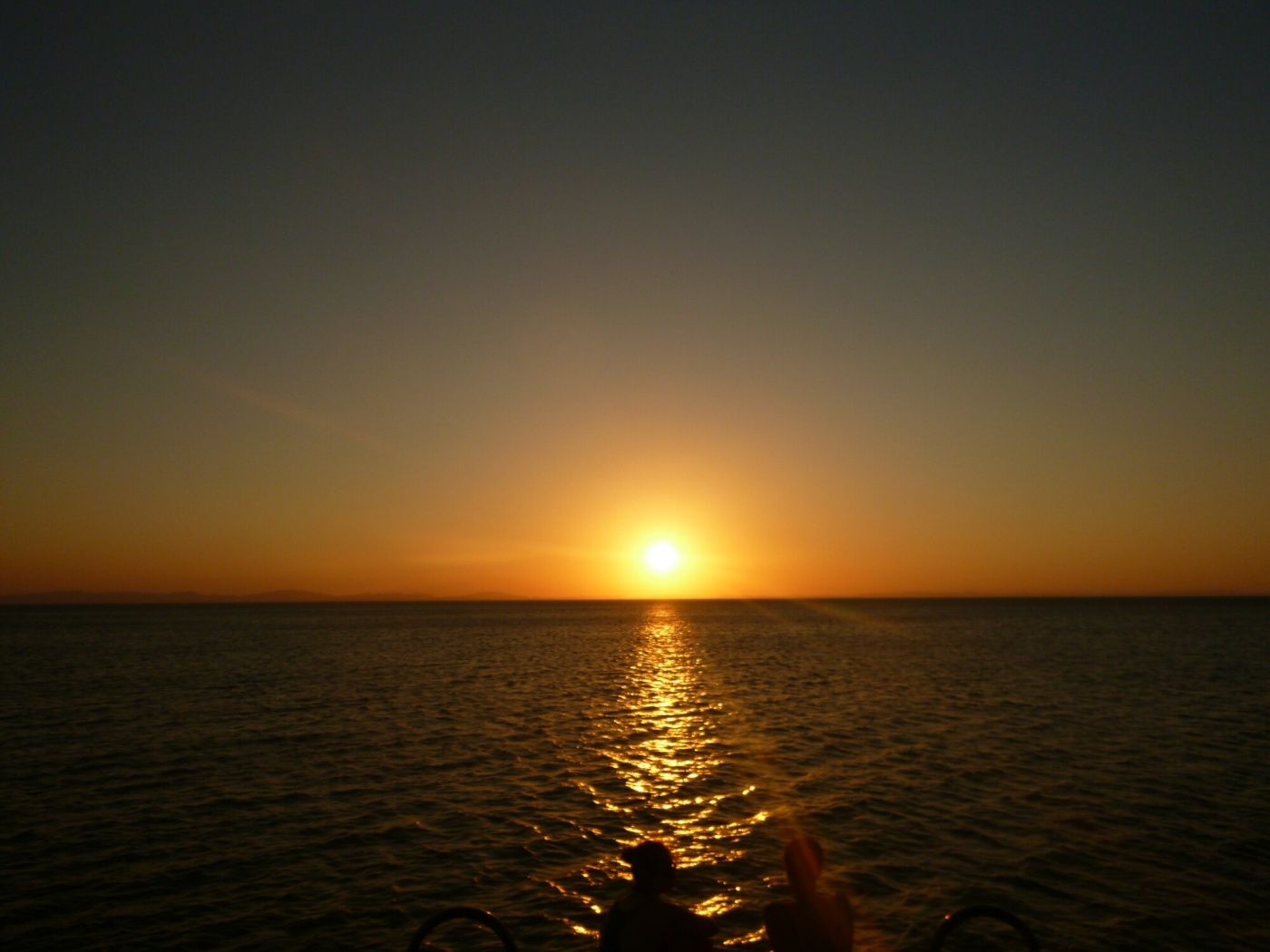 We had the morning to kill as the bus to the other part of the island named Merida was not until the afternoon. Consequently, I grabbed a fresh melon juice served in a clear plastic sandwich bag with a straw poking out the top and a chicken empinyada (pastry). While I hate the fact that plastic is used for absolutely everything, the melon juice tasted great and who knows maybe a plastic bag is less harmful than a plastic disposable cup?

As we had a free morning we decided to stroll to the local island beach. The walk there although scorching hot was pleasant. We chatted and walked along leisurely taking in the view of the trees and towering volcanos. We sat on the beach watching the waves gently ascend up the shore before walking back and catching our bus. We were leaving the basic hostel just in time as the running water seemed to have stopped and the WiFi just broke.

Although Merida was not far in distance it took us a good hour to get there. The bus stopped and started taking a long time. However, the journey was worth it, we arrived in a hostel with an actual reception. There was a desk and a proper restaurant. It was also clean – a novelty at the moment. It does suffer from power cuts constantly – but there is no such thing as the perfect hostel.

We were all starving hungry so got some food before going out to watch the sun set. The hostel opposite our one served home made, locally sourced, coconut and banana ice-cream which we enjoyed with a great view. The sweet natural flavours melted in my mouth. Ometepe island is very rural, remote and relaxing. There seems to be less rush here. While there is not much around in the sense of shops it is rather refreshing to see the simple farming sustainable way of life. 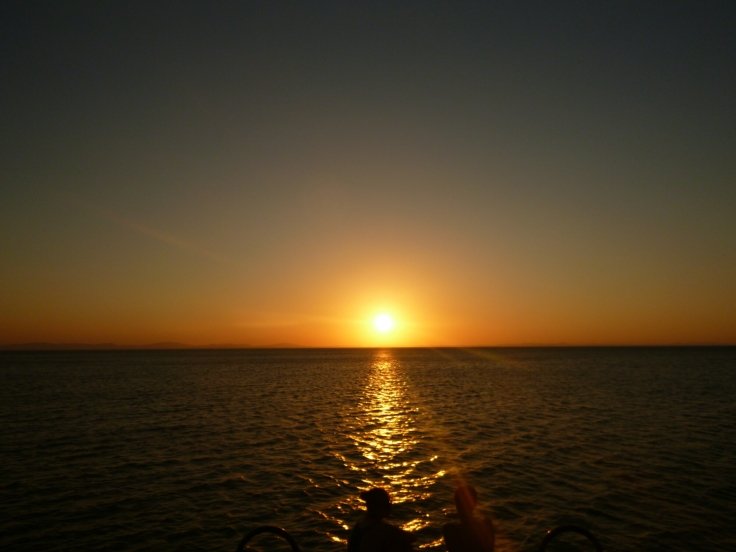 The next day we were up nice and early, raring to go. Four of us hired some bikes and set of to find some waterfalls. Unfortunately, our enthusiasm did not get us too far, my bike had faulty breaks which I put up for until the chain kept slipping and I could pedal no longer. My friend’s bike also seemed faulty so two of us returned and decided to power walk instead. This was definitely the right decision. We walked along the lake’s shore on a dirt road. I enjoyed taking in my surroundings by foot. An hour later we reached the waterfall park entrance. Here we walked a further one and a half hours while appreciating spectacular views of the two volcanoes coated in forests. We walked beneath forest canopy seeing monkeys above us eat leaves. The hike was mostly uphill and rather hard in the heat.

A while later, I reached the waterfall and hurriedly submerged myself in the freezing water. It was super refreshing cooling me down completely. It was just what the doctor ordered. I chatted with the many tourists that were there and then we departed to get some well deserved grub. I enjoyed a sandwich, plantain chips and papaya juice. After filling up on lunch we were feeling some what fatigued. Luckily as we began our walk back to the hostel a Canadian couple in a car stopped and offered us a lift – perfect. 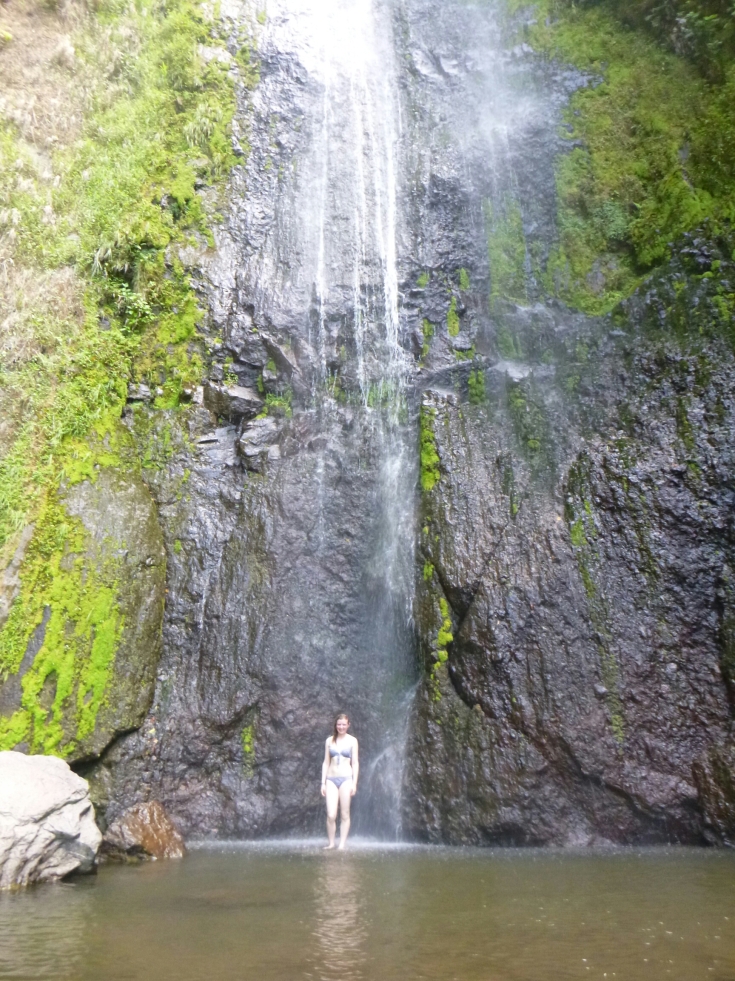 We got back to the hostel in time to wash our garments in the clothes basin the hostel has to offer. There is something therapeutic and comforting about hand washing your belongings. It’s a simple way of life – living out a rucksack, washing your things the natural way and not owning too much. As I scrubbed my smelly belongings and hung them in the direct, intense sun to dry, I couldn’t help but think about how things got so advanced. We have become so reliant on machines, doing things as quickly as possible and we have lost the desire to do things the traditional way.

In a bid to see more tradition and local life we woke up early to go for a run to a near by place named Santa Cruise. It was great jogging along the stoney dirt road watching locals cycle around. Houses along the way were built from mud, stone and corrugated iron roofs. Washing hung up in gardens, chicken roamed around in the yard and children played baseball in the street. Just over an hour later we reached Santa Cruise and I enjoyed a traditional breakfast – rice, eggs and beans. We hitched a ride back with a local and realised we came quiet some distance.

The island of Omnetepe is uniquely beautiful and well worth a stay. There are a few areas to chose from to sleep in, so there is something for everyone. All hostels seem to have pretty good tourist information too which is always helpful.

Top tips for staying in Ometepe:
-Get cash out before – there are limited cash machines here. Some hostels you can pay by card in but not all.

-Stay a couple of nights in different places if your time allows it.
-Enjoy the sunset in Merida with a home made ice-cream.

-Bring food or snacks if you don’t want to eat out all the time, as there is no supermarket here (that I have seen).

– Try hitch hiking, buses can be slow. Bikes and motorbikes are a bit tricky on the stone dirt roads so bare this in mind if you want to hire one.

-last but not least enjoy staying away from the crowds in Nicaragua on this unique, remote and stunning island.