I began my journey battling against the crowds in the thriving city of London home to 8.7 million people. Then I journeyed though the friendly city of Edinburgh (population: 495,000). Next on the cards, the Scottish highlands, where a mere 2,000 individuals reside. My adventure into the wilderness was well and truly under way.

I am fortunate enough to have a Scottish buddy who I met in America Road tripping. She picked her brother and myself up from Inverness station (a four hour train ride from Edinburgh). The reunion was epic. It was over a year and a half ago we met in California and adventured to Vegas and the Grand Canyon.

She drove us to her stunning home in Poolewe. The drive took us through the majestic Highlands. Dramatic mountains protruded from the ground towering above us either side of the windy country roads. Local cars zoomed past as the drivers knew the lay of the land.

I stared out the window with my eyes glued to the scenery. Rugged, weathered rocks were exposed at the tops of the hills. Trees were sparse from when historically we deforested the majority of the Scottish landscape. While, this completely altered the ecosystem making it somewhat man-made and not ‘natural’ I couldn’t help but think how stunning the scene before me was.

The lack of trees means you can see the undulating terrain and track the flow of water down the mountains. River paths mark tracks down the sides of the cliffs and cause the build up of sediments at the base of the hills. This gives way to alluvial fans, as the name suggests forming features with a cone like appearance at the mountain bases.

Two hours later we arrived at my friend’s peaceful home in Poolewe. Living in a small village (population 230 people)  is somewhat different to living in London it turns out. Everybody knows everybody, which can be rather nice in a way. Neighbours actually talk to each other. The village has one pub, a café, a post-office and a community hall. On my friends door step is the Scottish Highlands wilderness with plenty of walks, fishing, outdoor swimming and camping opportunities . It is a spectacular place to live.

Day one in the Highlands:

After a blueberry and banana pancake breakfast we set off for some fishing. It turned out all the tourist fishing boats were out of order. Instead we hired our own motor boat and took it for a spin. 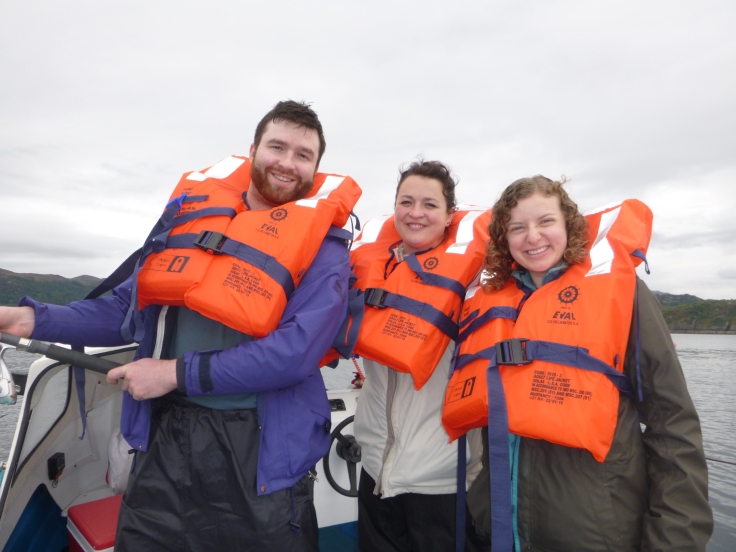 The slight glitch was that none of us had driven a boat before. The owner kept telling us it was nothing like driving a car. Useful. After a rocky start we got the hang of steering a boat. It was actually quiet easy once we got used to it. It helped that we had the Loch practically to ourselves so there wasn’t that much maneuvering needed.

The water was calm. We saw a seal bob his head above the water and an eagle soar above us. We drove around mini islands and across the picturesque Loch. It was a great laugh.

We returned home rejuvenated and ready to plan our next adventure which was to be a island hoping road-trip.

Before the sun set we went for an evening stroll through a patch of woodland. ‘Chanterelle, ‘ my pal joyfully announced. I looked to where she was pointing to see a yellow mushroom growing by the root of a tree. Turned out we were in luck there were loads. We gathered the mushrooms up and took them home to be prepared for a tasty meal.