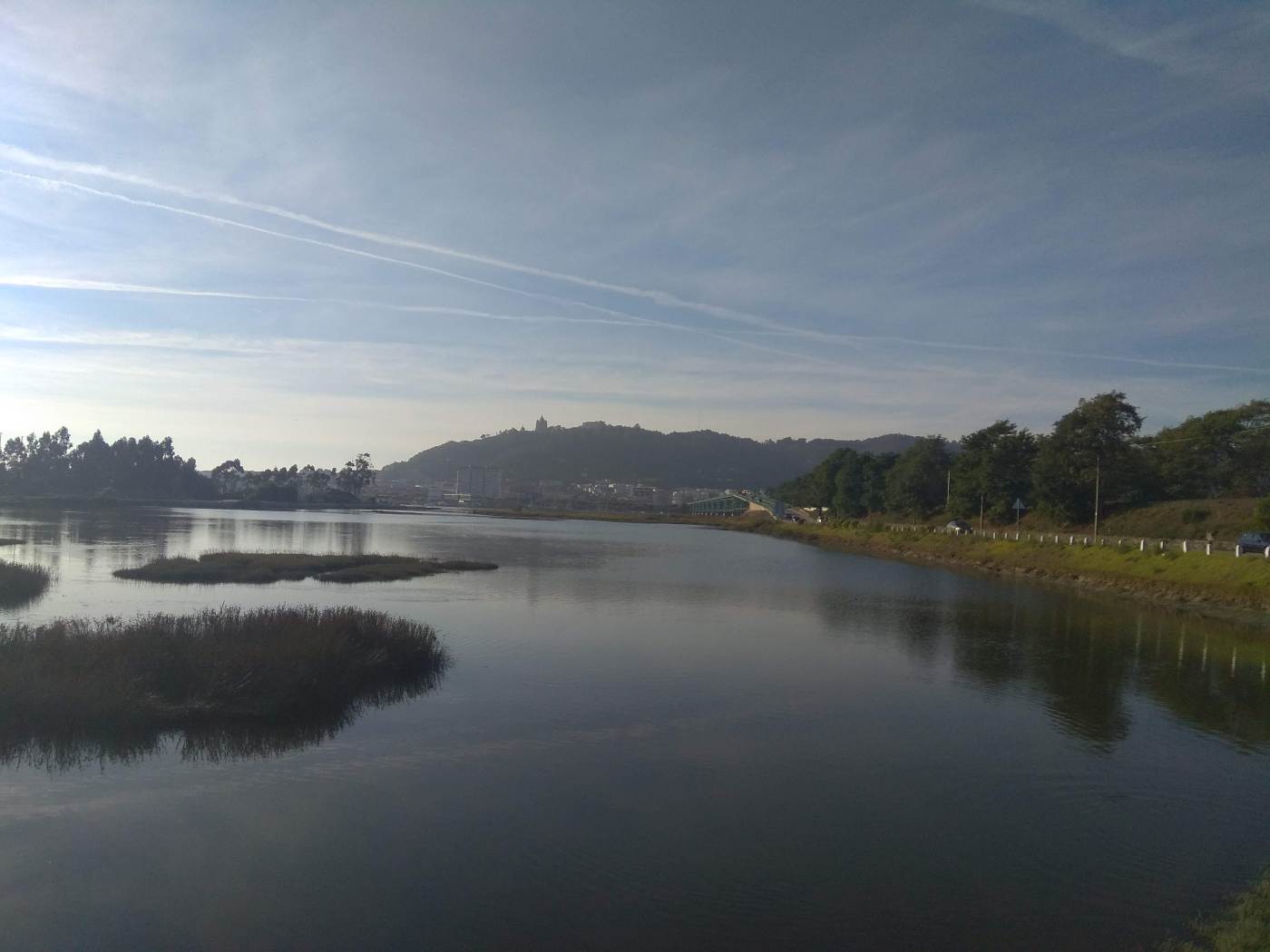 Everyone slowly shuffled out of their bunk beds, put on smelly walking clothes and went downstairs for breakfast.

My brother and I decided to start at the leisurely time of 10 am to avoid the morning rush.

We walked from the ghost town Fao across the river to Esposende – a much larger town. While there we stopped on the beach for a snack. There was a thick mist like the day before. Consequently, visibility was relatively poor. 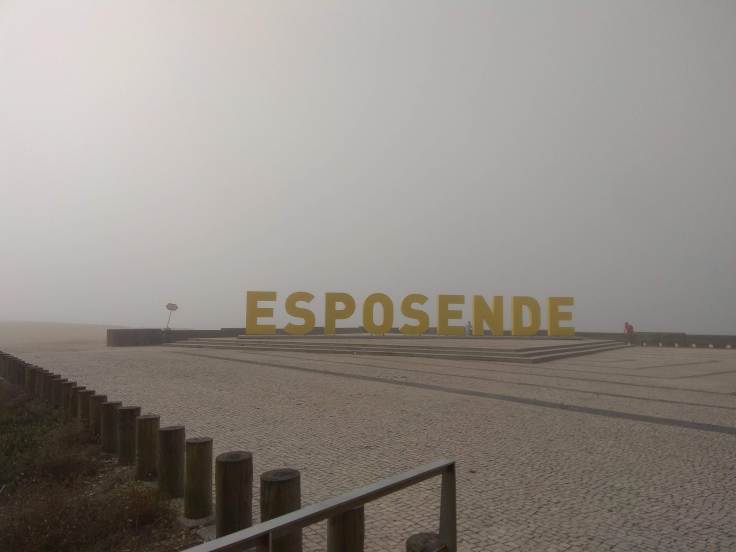 We stopped off at a small cafe where my brother discovered his new favourite drink – cacaolat (Spanish chocolate milk).

The rest of the day was spent walking inland through: towns, villages and forests. Unlike the day before we passed several other hiking groups. We chatted and then
overtook them. There were friends from Poland, Cheque Republic, Germany, Austria and Britain. 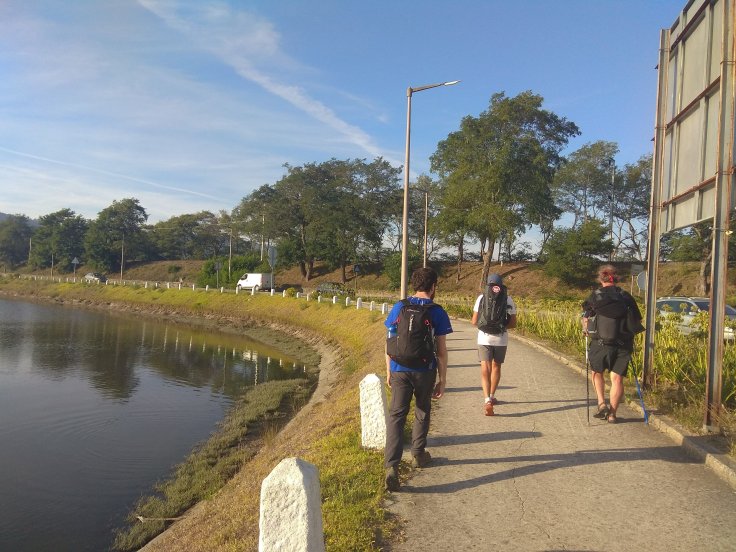 Walking though woodland was a welcomed change. We were used to hiking through villages, admiring beautiful homes.

The forested mountains were spectacular. Plus they were shady. A river ran at the bottom of the valley. We could hear its water gushing over rocks and meandering around bends.

On day two, we had an added bonus which we didn’t have on day one – inclines. There were steep hills for us to clamber up.

Towards the end of the day, we were feeling worse for wear. Our bags were digging into our shoulders, making them red raw. Plus our feet were throbbing.

Collapsing outside a cathedral we saw a series of steps up the mountain side. This was not part of our route but it looked enchanting. My brother told me if I climbed the steps he wouldn’t wait for me. I decided I better listen to him and save what little energy I had left.

The coastal path signage was easy to follow. We didn’t have a map but it didn’t matter. We could just plod on.

At long last we viewed the bridge we needed to cross to get to the town Viena do Castilla (our goal destination).

We soon discovered, it was the longest bridge we had ever walked across. Peering over the side the view was magnificent. In the far distance we could see another bridge. The sky was bright blue. And the mountain back drop was dark green. In the foreground red houses clustered in the town on the other side of the bridge.

Disembarking at the other side we followed camino signs across the busy road. We reached an impressive looking religious building. It had a sign on the outside saying albergue de pegrinos, meaning hostel for pilgrims.

My brother buzzed the intercom. The door didn’t open. We waited. After a few minutes, a middle aged man opened up, speaking only Portuguese. I deciphered what he was saying; ‘no double room left. You must go to the hotel down the road’. I said that is fine but if they had a dorm room that would be great. He reluctantly decided it would be okay if we stayed, telling us it would cost €12.50 each. Perfect. We walked in, handed over our passports and paid. Then the gentleman left us waiting around for a while. My legs threated to give up. I leaned on the wall. Where were we? The huge building must have originally been a convent for nuns. There was a courtyard in the middle and many large rooms. the building was decorated with crosses and christ.

Finally, he showed us to a private three bed room with an en-suit. What a result. ‘Is there a key?’ I asked in Spanish. ‘No’, he said. ‘Will there be breakfast in the morning’, I checked. ‘No’, he said again. ‘Okay thank you,’ I smiled. I showered and collapsed on one of the beds.

We forced ourselves out for dinner. On the walk out we saw matresses on the floor. It looked like they were fully booked. We enjoyed more tasty tapas and pastries. Plus a beautiful sun-set sky. 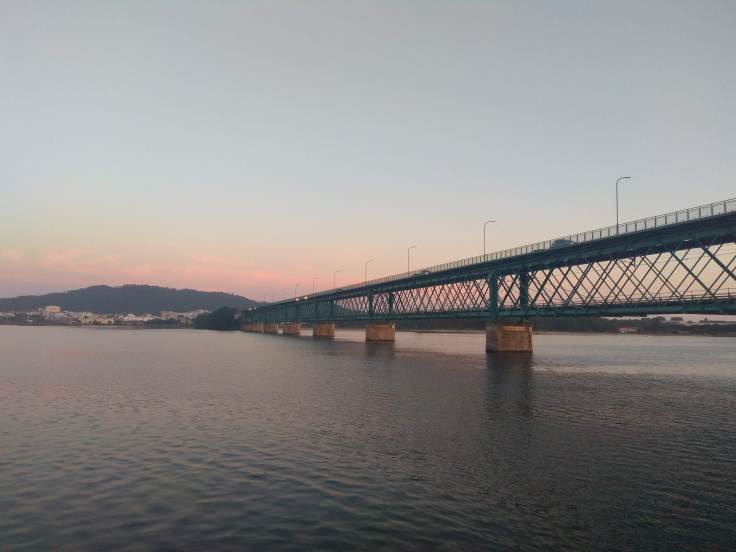 We completed a very hard 28 km day and were grateful not to have to share a room with 6 other early rises who would inevitably noisily snore.

2 thoughts on “Sleep-over in a Portuguese convent”