The day began in the tourist information shop in the V&A Waterfront area. We wanted to gather ideas about the best way to spend our remaining five days in Cape Town.

Sitting down with an iced coffee overlooking the harbour we made a rough plan.

To begin with we purchased bus tickets from The City Sightseeing Tours Company for the next couple of days.

Feeling extremely organised we had a mooch around the harbour. We found the Cape Town Museum and decided to pop inside. The woman on the reception desk explained to us how the shore line at Cape Town used to be very different. Previously it used to come up to The Strand Road. Pictured below.

As she was so friendly we decided to buy a ticket for the exhibition costing 100 rands or £5. It was definitely worth it.

Upstairs was a fascinating photo exhibition displaying the winners of a Russian photography competition.

My favourites included a wrestling match pictured in Kolkata, India during the festival of Diwali. 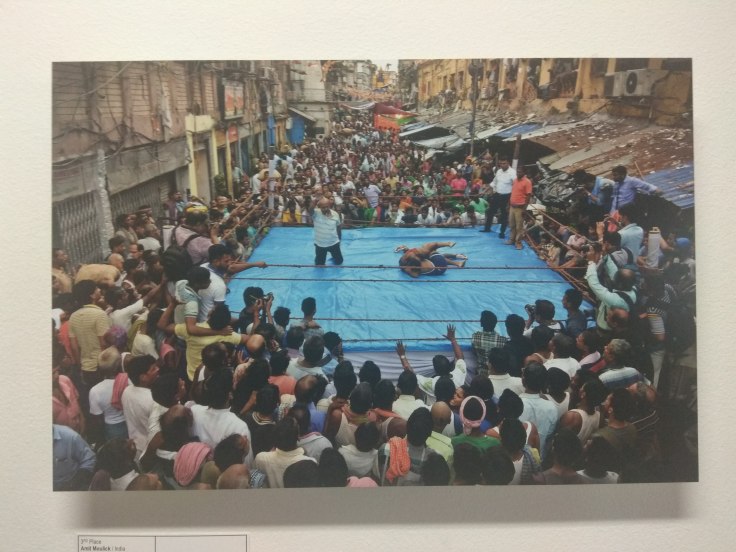 And a series showing girls from the toughest slums in Nairobi learning to box. Boxing helped them become physically and emotionally stronger.

Other pictures showed children hiding from a gunman as they protested over their fishing rights in South Africa. This poses a double edged sword. It is not a simple matter of getting people to stop fishing to protect the environment. The impact to their livelihood has to be considered too.

We wandered downstairs to learn about Cape Town’s history. First discovered by the Portuguese passing by ship, Cape Town is in the most southerly part of Africa. The Dutch were the first to colonise the region in 1652.

The first company in the world – The Dutch East India Trading Company sent their ‘branch manager’ Jan van Riebeeck to Cape Town to set up a Trading Post. This was a success until 1795 when the British took over for a while. The Brits briefly gave the land back to the Dutch as part of a peace agreement but then colonised Cape Town once again at the start of the Napoleonic war. 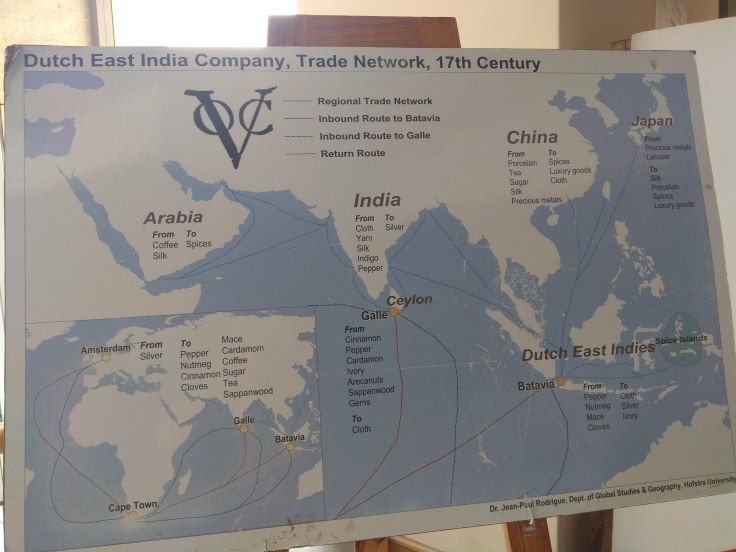 In the basement of the museum is the remains of a fort, Chavonnes Battery, built in 1714. The walls were 3.3 m high and 6 m wide and the fort was also armed with 16 cannons. The region’s defence strategy was well thought out. 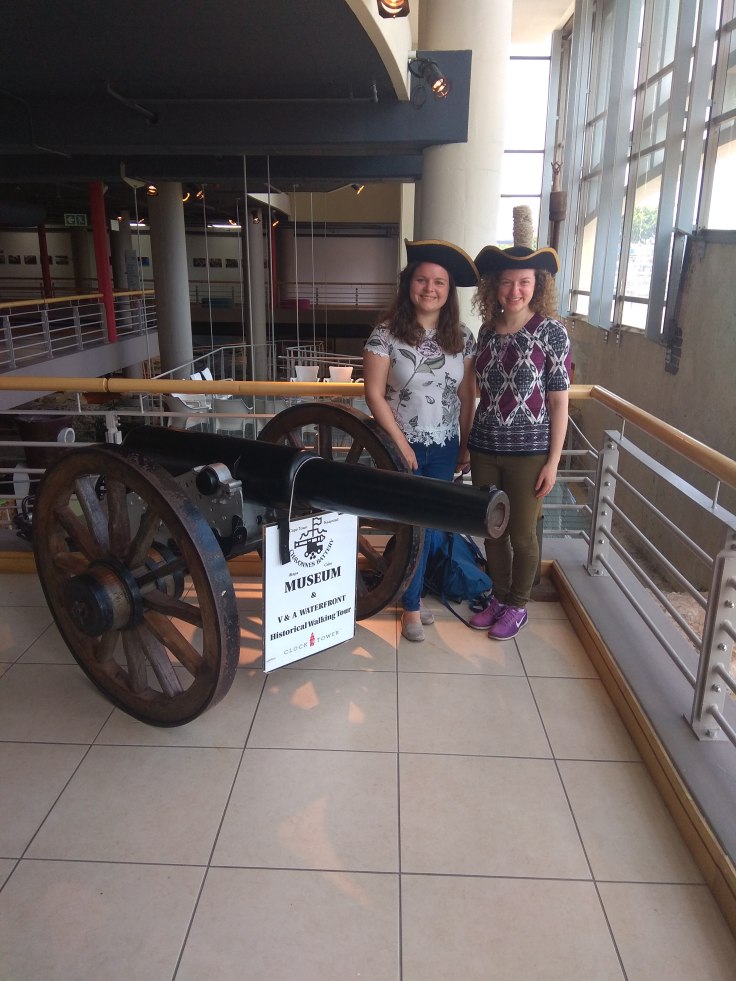 In order to continue learning we joined the free walking tour starting at 81 Long Street (The sightseeing tour office). Our guide, Carmia, started the tour at the second oldest square in Cape Town, created by Jan van Riebeeck as a place to sell fruit and vegetables. Shortly after, the police station was founded to keep order in the area.

Nearby, we saw part of the Berlin Wall, given to Nelson Mandela by Germany in 1996 to signify peace and the struggle to unite people.

Next we stopped by St George’s Cathedral or The People’s Church. This is open to everyone, it is a place where no discrimination takes place. The church is made from limestone from Table Mountain.

In contrast to the church, the High Court found just across the road was historically home to large amounts of injustice. In South Africa there used to be four different races classified: black, coloured, Indian and white. In 1948 the apartheid separated the whites from the non-whites. There were several ridiculous tests that were performed which classed someone as white or not. One was the pencil test. If a pencil fell out of someone’s hair, meaning it was slick then they would be classed as white. If not they were non-white. The reason we stopped at the High Court was because it was possible for people to be reclassified there. This involved further tests, one of which was looking at the colour of people’s nail cuticles.

The Company Gardens in the town center are all that remains of the original gardens set up by the Dutch colonisers to provide fresh produce for trading. They are now home to European squirrels and Egyptian geese brought over by the Dutch, along with the oldest tree in the region which is 350 years old.

In the middle of the park is a magnificent building, having started as a tool shed it has now been converted into offices for the president. Nelson Mandela was told in the same building that he was a freed man and Queen Elizabeth enjoyed her 21st birthday there. The Greek gods, Poseidon and Mercury are carved on the top of the building. Gods of the ocean and traders, they are symbolic for the Dutch colonisers who traveled the seas and traded heavily. 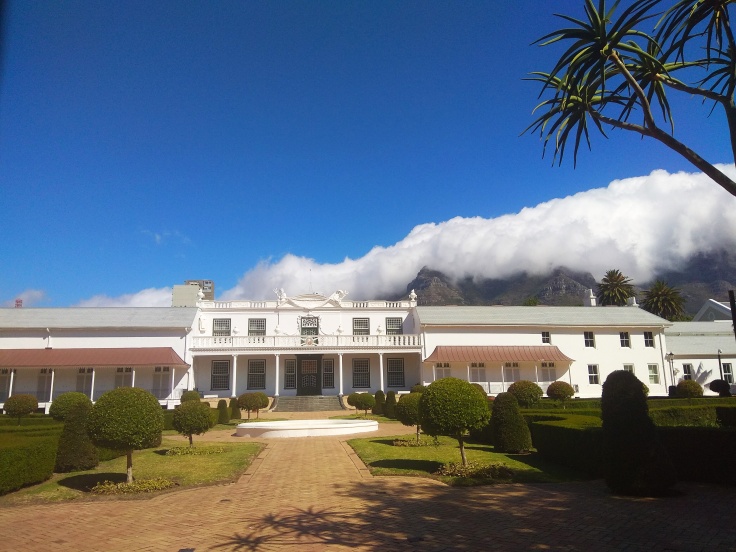 Walking through downtown we saw the City Hall. This is made from sandstone from Bath in the UK. Nelson Mandela spoke from the first balcony of this building about forgiveness. He said if he could forgive so could everyone else in South Africa. It was time to move on, united as one. The City Hall also has a replica of Big Ben.

After a fascinating tour we returned to the hotel for a delicious dinner. We discovered the famous South African dessert Malwa pudding. It is a sticky, fruit sponge served with custard. It as safe to say that I will be trying many more Malwa puddings on this holiday.