We arrived at Yellowstone National Park on Friday evening after a long but beautiful drive. Our camp site was luxurious – there were heated, clean toilets. Perfect as the temperature was bellow freezing. There were lots of rules to prevent bears being attracted to the area. For example, we couldn’t keep any food out so we were provided with food safes – metal, locked containers bolted to the ground.

That evening we walked to an amphitheatre to hear a talk about owls, it was really interesting. Apparently, owls rotate their heads 270 degrees! There were some funny pictures of this phenomenon. On our walk back to the tent we saw the sky carpeted with stars and spotted the big dipper. On arriving back at the tent we layered up in preparation for the freezing night. As I closed my eyes I heard wolves, owls and elk calling and I dreamt of meetings a wolf.

In the morning the tent was coated in frost and my sleeping bag wet from condensation. It was time to explore Yellowstone I couldn’t contain my excitement.

To begin with I saw my first buffalo. There are 5,000 in the entire Park. We saw a heard chilling along the river.

They are such strange, massive creature and as they were Park buffalo they were fearless, strolling along near the car, causing traffic jams. 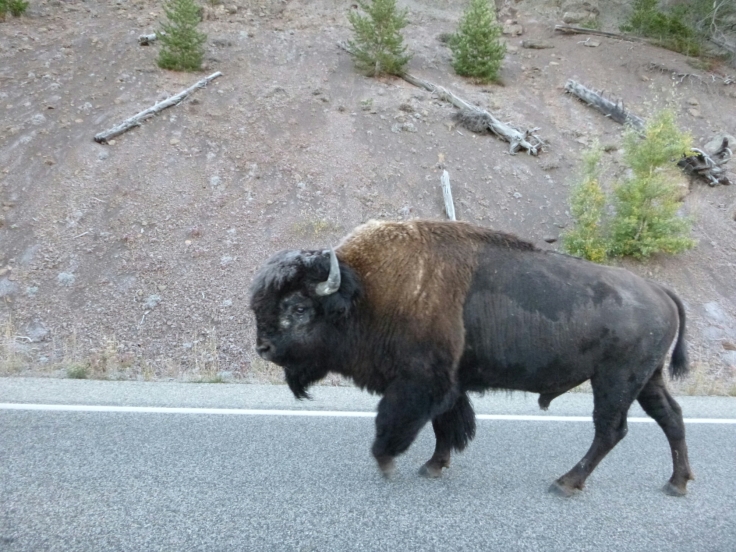 The rivers were giving off steam. This was because they were hot from tectonic activity.

Next it was time for the geyser tour.

We went for a walk along a man-made wooden path. The geysers and surrounding mud were said to be so acidic it could melt your boots. Geysers are formed from tectonic activity and let off steam or hot water when pressure underground releases energy. 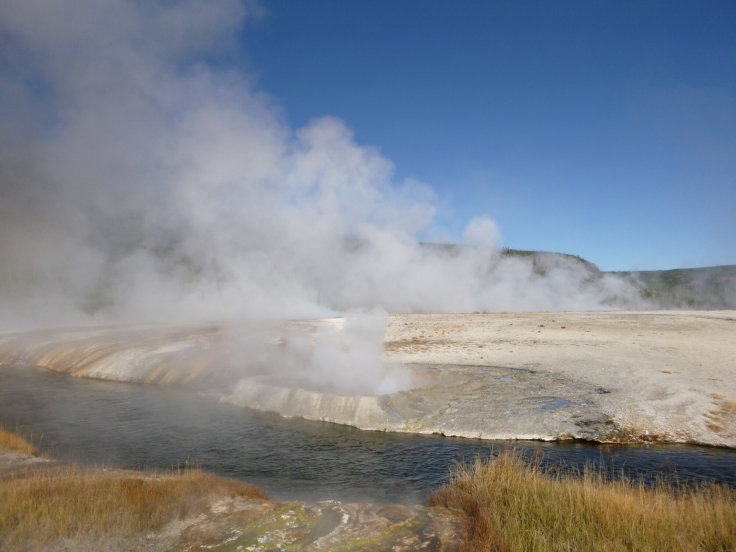 The geysers were named different things and were all different colours and sizes. 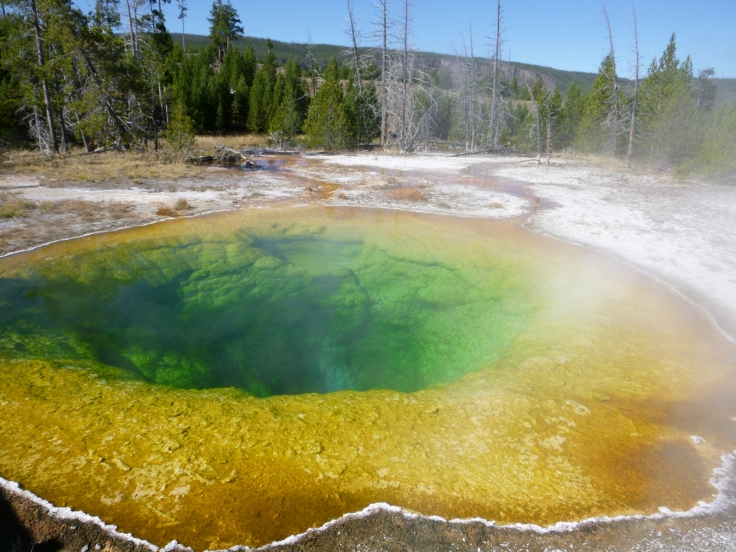 (this one was called morning glory)

To end with we saw ‘old faithful’ – a geyser that erupts every hour and has a plume of water and smoke that goes up 80 feet. 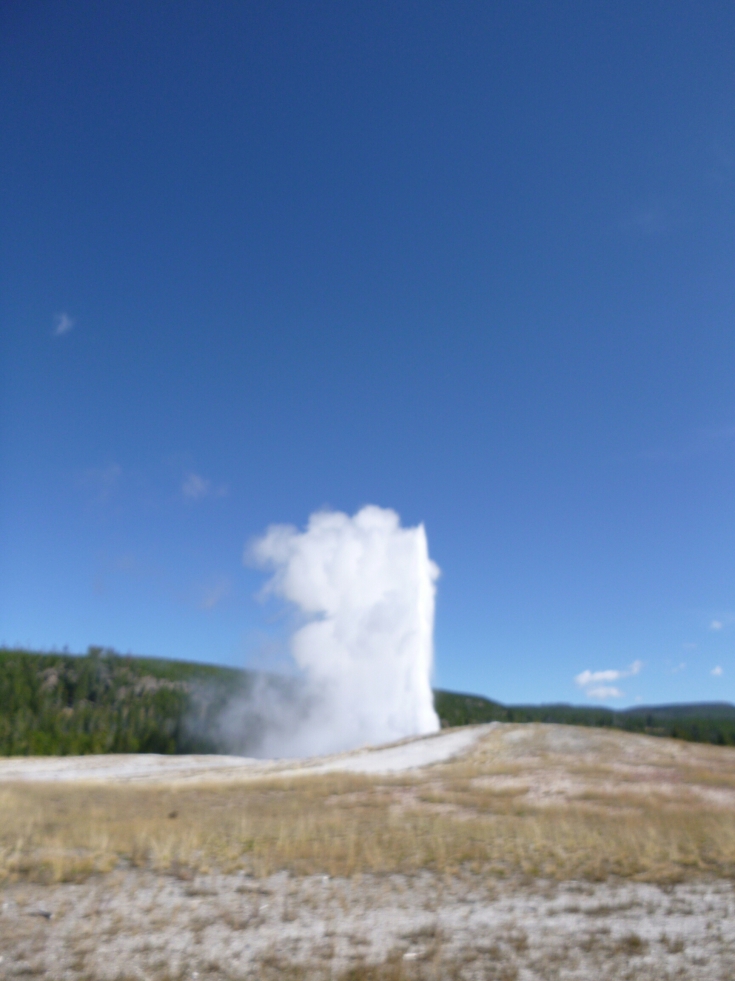 Our next stop was the mud volcanoes. These were like witch’s bubbling cauldrons. I couldn’t get my head around how they were natural and not just some machine underground making them bubble profusely. 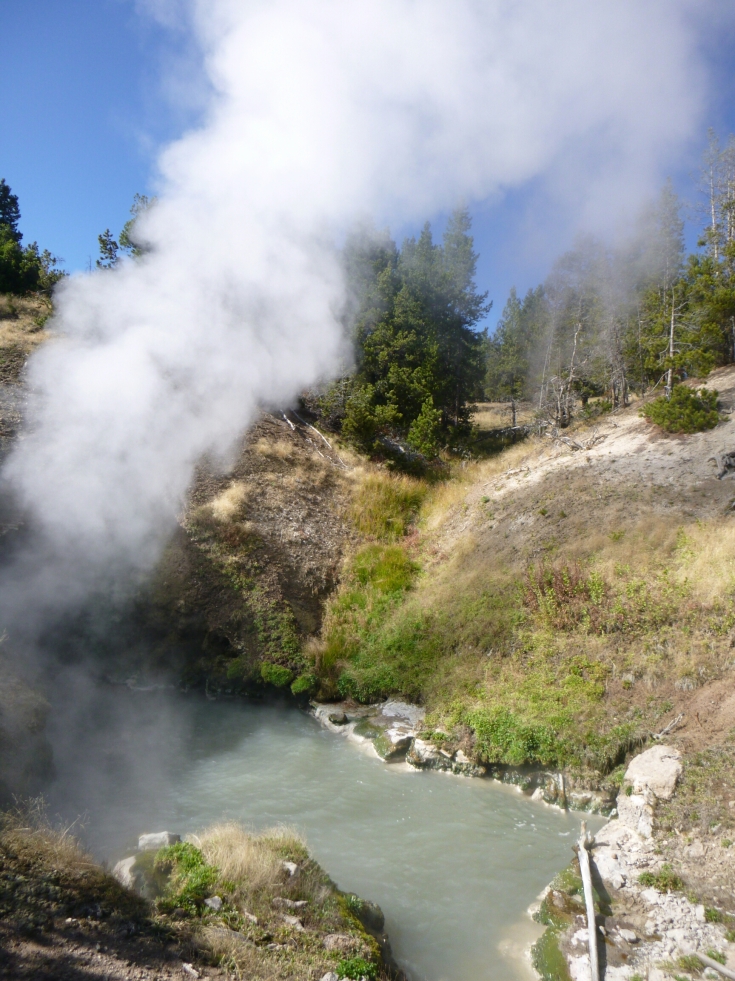 Our last feature stop was the canyon. This was the most spectacular waterfall I have ever seen. Water gushed down over dramatic V shaped mountains and flowed along a red valley bottom.

When we stopped off in Gardener town, we saw some elk grazing in people’s gardens. It was most surreal thing, imagine having a pet elk. 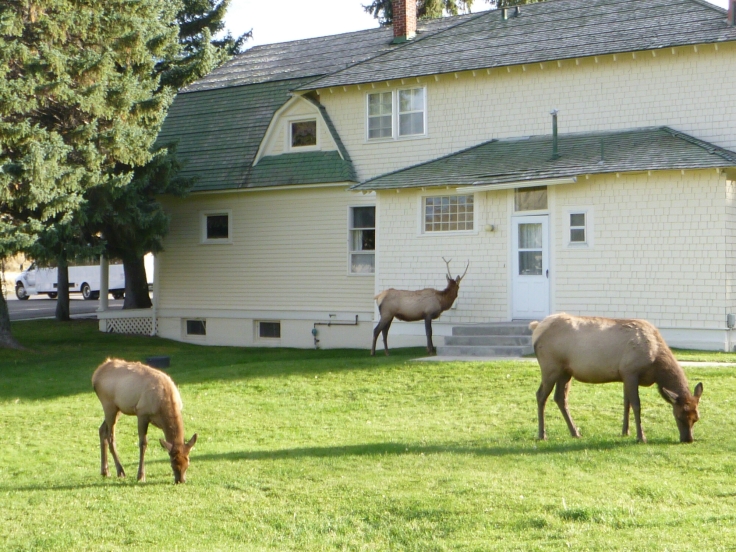 Yellowstone National park is an incredible place, full of beautiful natural features. It was a fantastic day and I would love to go back again some time to bike around.