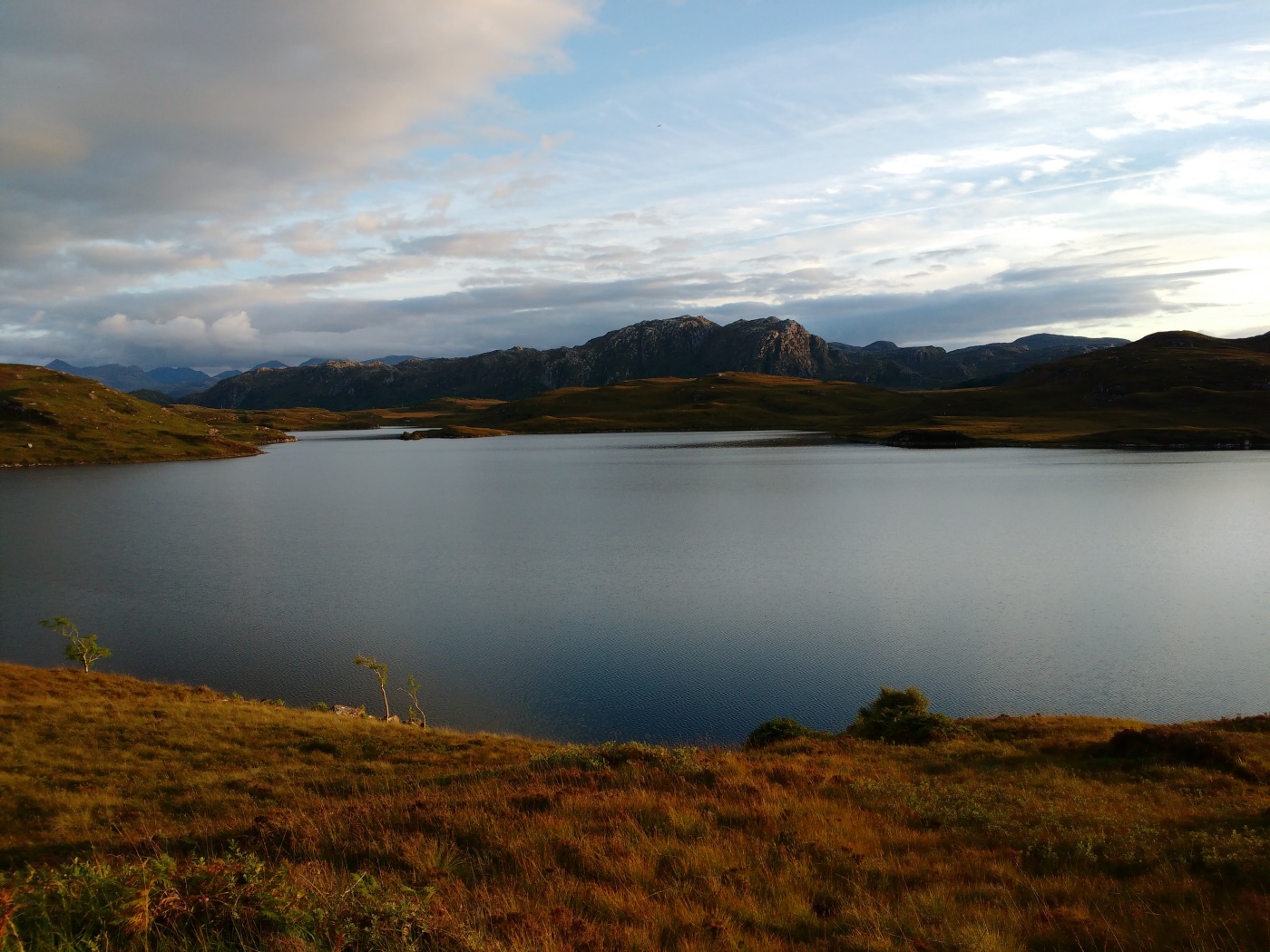 I woke up in a comfy double bed to the sound of rain pattering down onto the sky-light. Taking a deep breath I stretched my arms above my head.

A cooked Scottish breakfast was waiting for me downstairs. Runny yellow egg yolks spilled out onto patty cakes, crispy black pudding was placed next to lean bacon and a generous portion of beans sat to the left of the dish.  This fueled me perfectly for the day ahead.

I went for another 14 mile hike through the wilderness situated on my pal’s door step. All three of us set off for to the nearby loch singing as we went. We reached the lake in an hour where I left my friends to go fishing. Meanwhile, I carried on adventuring. 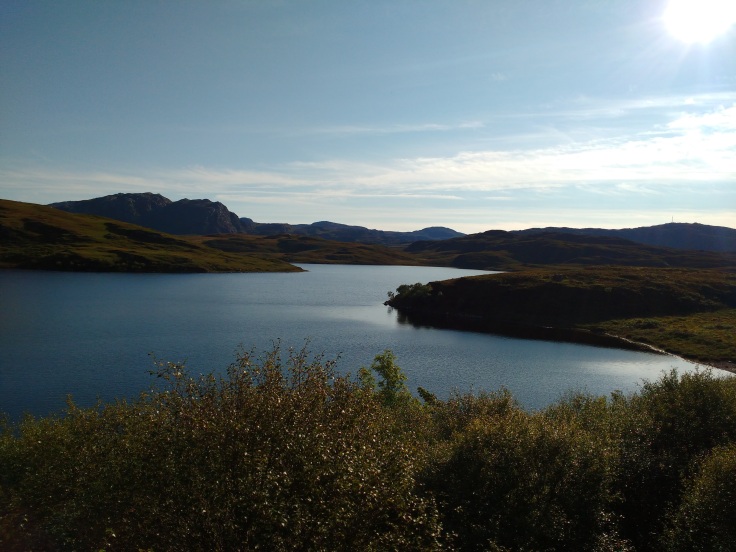 With a day pack, map and compass I didn’t need much else. I walked around the huge still loch and made it to some nearby hills that I was attempting to summit. I was following the Beinn Airigh Charr route.

It wasn’t so easy, soon the path disappeared and I was walking through boggy heather.  I reached a farm and continued left walking along next to a gushing river.  I carefully used stepping stones to cross the peaceful water way. Pink flowers stood out in the landscape. All I could hear was the wind passing by me and water flowing down the dramatic mountains. 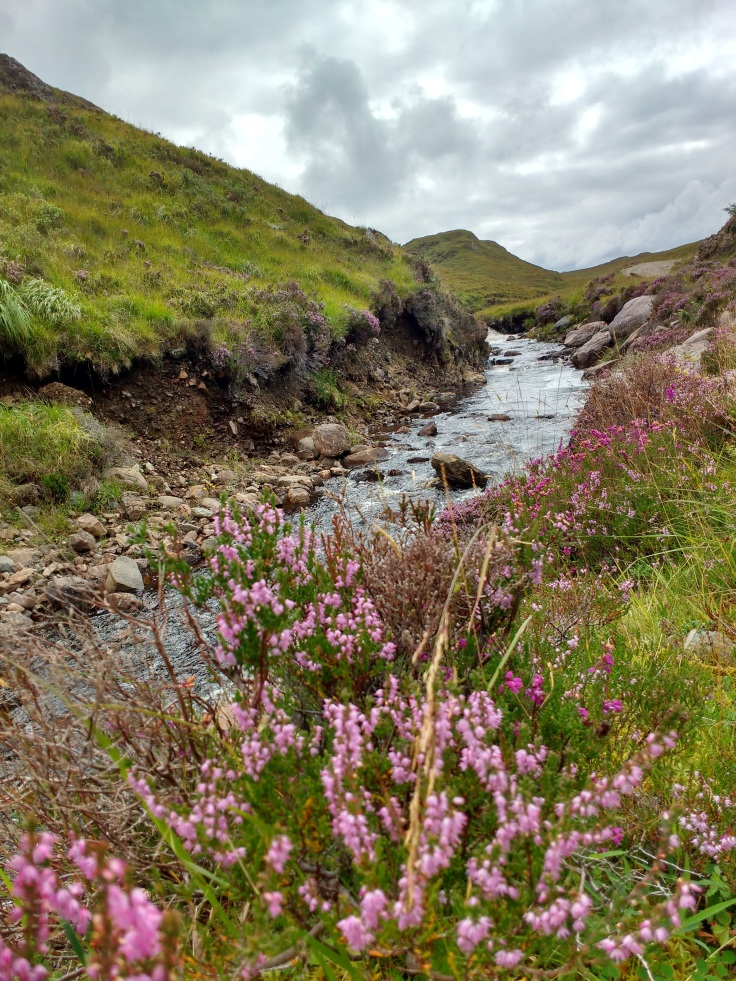 I spied waterfalls and longed to jump in. Promising myself I could once I found the top of the mountain. Quartz under my feet glistened in the sun light. Before long I was unsure  where I was going. I just continued upwards following streams.

In an attempt to reach the summit I clambered up a very steep hill and over some rocks to reach what I thought to be the top. Panting and peering around me I could see off into the far distance. Holding my OS map I tried to work out exactly where I was. I could see the ocean and various lochs. 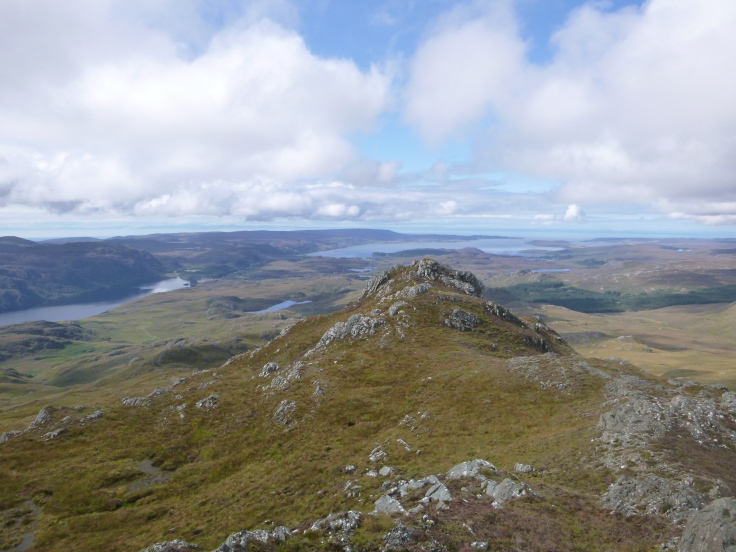 Nature surrounded me, I saw no other human, no road or even foot path.  I was in the wilderness away from everything, simply alone in the magical highlands. I began to slowly walk down the mountain enjoying the view as I did so.

I reached the waterfall I was keen to jump in and did exactly that. It wasn’t that deep but it sure was chilly. As I got out and dressed a huge group of around 15 people passed me. Where did they come from? I thought. Annoyed that my solo hike was being interrupted by human pollution, I hurried off down the mountain trying to get away from them.

After a few hours I made it back to the loch where I found my buddy still fishing.

It was golden hour. As the sun sunk lower in the sky the mountains I had climbed lit up in the back ground. The clear blue lake reflected the sun romantically. There was another swimming opportunity I would have been mad to pass up on.

There I was jumping into the lake. Swimming breast stroke while my eyes were glued to the spectacular scenery. As the cold began to penetrate my bones I thought it time to warm up.

Sitting on the bank I watched the sun fall on the rolling heather covered hill. It was silent. After quiet some time we left the loch with a rainbow trout and made it back to my friend’s house. Not before we picked some blackberries. For dinner we had fresh trout and roast potatoes. Followed by blackberry and apple crumble.

On my last day, it was time to see my buddy’s favorite beach. The sea was turquoise and clear, rocks protruded into the sea looking ever so scenic.

There were some funny patterns a secret artist had made out of stones. My favorite was a sheep with actual sheep poo or jobbies (Scottish slang). This beach was the first that I had seen actual sheep on too. They were munching on the grass in a field next to the sand.

We both mustered up the courage to go for a quick sea swim. The only option was running in as fast as I could without thinking too much. We managed to do a couple of stretches of breast stroke before running out shivering. 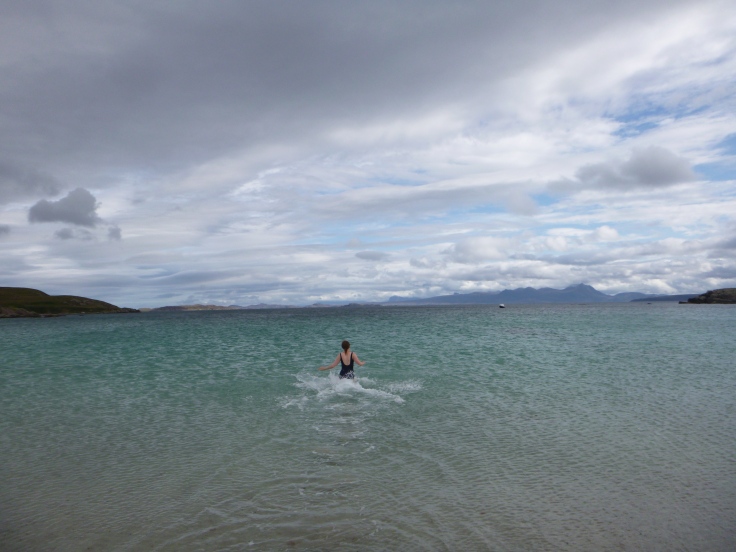 After our morning swim we rushed into the warm car and back to the house for cheesy beans on toast to warm up.

Sadly before long it was time to go back to London. Our last road trip was to Inveness the same way we had come.

I sat down at the airport where a father was reading to his baby, We are Going on a Bear hunt. I closed my eyes and waited for my flight home reflecting on how fantastic the trip had been.