Shadows danced on the trees that surrounded us. The ambiguous shapes vanished swiftly as I moved my lantern away. We were trekking up a steep, narrow path enclosed by woodland.

Glimpsing fragments of sky through the thick vegetation, I could see it was a dark blue. The sun had set forty minutes ago.

Unsure where we were going we continued the ascent hoping to reach a clearing at the top. Shining our torch infront, no end point was visible.

Birds chirped relentlessly and in the far distance we could hear the quiet hum of traffic.

Wondering whether this was a good idea, I plodded on. I was most concerned about bumping into people. No one was around as far as I could tell. Walking through dark alley ways in cities is always a bad idea but we were in the countryside. In the middle of nowhere. Plus we were in the UK. There are no bears or scary animals here, not like when I was camping in the USA. So what could possibly go wrong?

After a little while longer we reached an open field. It was spectacular. The luminous moon shone with such power that the entire field was lit up. It was safe to say we didn’t need the torch for now.

We looked for a spot to sleep in. While the field was nice. The grass was rather long and we couldn’t camp on the trimmed, flat foot path – as perfect as it would have been. We needed somewhere hidden, that would feel safe. Also we didn’t want to have people walking by us in the morning.

Consequently, we walked a little further along the trail to find some woodland with more shelter. Meandering away from the trodden trail we found a small enclosure. Dodging a fallen branch we squeezed through a gap in the trees and found a patch of flat ground. Dumping our packs we set up a mini camp. This involved placing our mats side by side and crawling into our sleeping bags and covering them with our water proof bivy bags.

Exhausted I lay down and waited for sleep. I thought about how tasty dinner was. Taking the train from Victoria to Oxted took only 30 minutes, we looked around the quaint town for a bite to eat.

Luckily we found a pleasant pub named The Bull, with an outdoor garden. It was lovely. I tucked into a nut roast Sunday dinner.

Thoughts of the tasty food enabled me to drift into sleep. The sun rose at 4am and I woke up to hear the chirping of birds. Opening my eyes I saw sunlight dappling through a covering of leaves above. It was a magical way to wake up.

Being early I closed my eyes and fell asleep once more. I dreamt that someone walked over us and I tried to call my friend’s name but couldn’t. I somehow knew I was asleep so tried to wake up but I couldn’t. Next I dreamt of spiders but they weren’t poisonous so I wasn’t bothered.

A while later I woke up properly.

We packed our bags and set off for our day hike. With no tent to put away it didn’t take long to get ready. It was just a matter of stuffing our sleeping and bivy bags in our packs and rolling our mats up.

Leaving at 8am we discovered in sunlight where we had walked. The fields and surrounding scenary was wonderful.

A field carpeted in white flowers was first up. There was a sign warning us not to leave the footpath as it was lambing season. It was lucky we didn’t camp in that field. 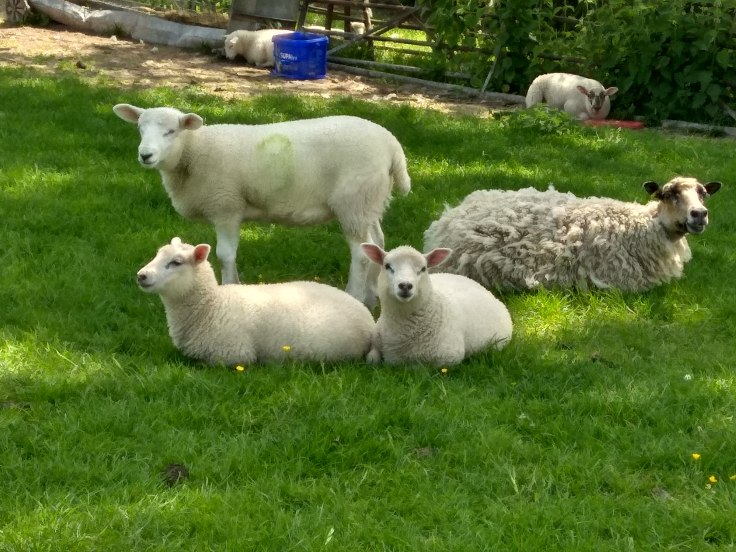 We followed signs and our guide book along the North Downs National footpath. While it is well signposted there were three occasions when we got slightly lost. We knew we were lost because the sign posts ended. This didn’t matter we still enjoyed wonderful views and always made it back to where we needed. Even if it meant climbing up unnecessary hills.

Horses were relaxing in one field. We patted them and fed them grass. They were pretty tame. There is something therapeutic about petting farm animals.

A little while later we saw a house on a house. It looked like something from a cartoon. The big house had appeared to have eaten the smaller house.

We met our other friend on route and all three of us enjoyed a 29km hike.

By 4pm we arrived in Cuxton exhausted and ready for some grub. There was another pub which welcomed us. We collapsed in their garden and ordered dinner.

Mustering the strength to move, we took the train back to London and were greeted with a harsh down pour of rain. Sleeping in my bed that evening was bliss.