My alarm woke me up at 8am, I stretched my arms above my head and took a deep breath. My neck was stiff and legs achy. We were nearing the end of our holiday and  didn’t want to return home shattered. Consequently, we decided to change our plans sightly. Instead of walking another day along the congested camino path to Padron we would go to Villagarcía and explore a different town in Spain (which would not be full of walkers).

We asked the hostel to order us a taxi and arrived in Villagarcia 20 minutes later. Situated on the coast the town had a somewhat relaxed vibe. However, it felt largely industrial – there were numerous clunky cranes on the sea front. Whatsmore, there were wooden posts jutting out of the sea.

We dropped our bags off at the hotel but were too early to check in just yet. So we hunted down breakfast. There was a cafe overlooking the beach that we stopped in. It’s windows were smashed but they had nice seats outside and they sold proper Spanish hot chocolate. We took a table and enjoyed croissants and hot chocolate. Locals jogged by with their dogs. A young couple on the table next to us were blasting Spanish music on their phone. 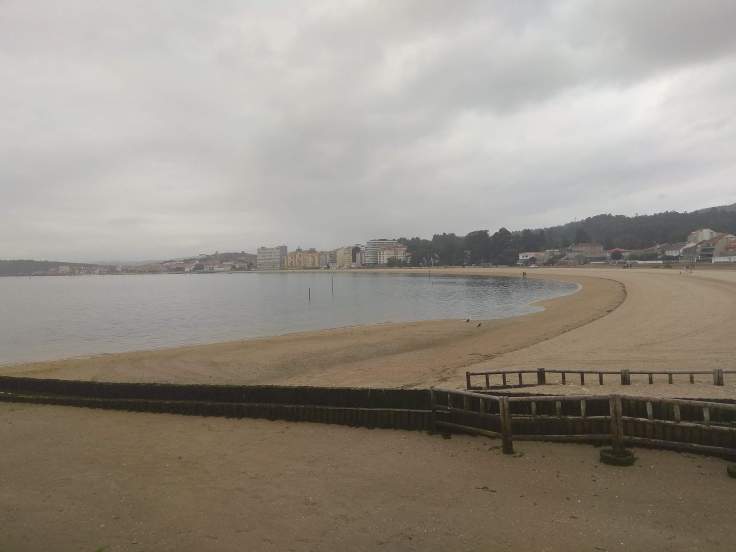 Feeling satisfied we walked along the beach and found another spot to have a seat. We stopped at the end of a stone pier looking across Villagarcía. As strange as the town seemed with its giant machinery and wooden posts poking out of the sea, the area was uniquely pretty. The blue calm sea swayed up the yellow sandy beach while red houses and graffiti covered walls lined the sea front.

We wandered around the slightly run down town buying salad and snacks for lunch from the super market before returning to the hotel for check in. I collapsed in the room and fell asleep for a while. All the walking and early starts had taken it’s toll.

I woke up grogy and thought it a good idea to jump in the hotel pool. I had all to myself. However, it was freezing and seemed a bit creepy.

We decided to look for somewhere to enjoy a nice dinner. Walking along the beach promenade once more the sun was begining to set. Oranges and pinks lit up the sky.

I was keen to find a restaurant where we could enjoy the sunset. Nothing was really taking our fancy.

We stopped in a pub / restaurant and wanted to simply look at the menu. Before we knew it the waitress was bringing us bread and cutlery. Looking at the menu we didn’t like anything. ‘Such bread pushers,’ my brother said. ‘Let’s go?’ he asked. I felt bad but thinking about it we never asked for bread, we just wanted to look at the food menu. Not happy with our options we left in a hurry before the waitress came back. I felt very rebellious and guilty. We continued walking in search of somewhere better.

It was certainly the right decision to leave the bread pusher becuase a while later we found the perfect restaurant on the sea front. It had delicious tapas options and a great view.

Feeling very full we slowly strolled back to the hotel and fell asleep.