Kitted with a hard hat, gas mask and head torch, we descended 90 meters below the earth’s surface. 15 of us squished into a metal cage lift. On exiting the air was cold. Looking upwards my head lamp revealed a ceiling constructed with timber. The wood was changed periodically when rot became visible. We were in one of Wales’ many coal mines. Big pit was shut for mining in 1980 when Margret Thatcher declared the closure of all UK mines, claiming it more economical to import coal from abroad. Big Pit was re-opened in 1983 for public tours. 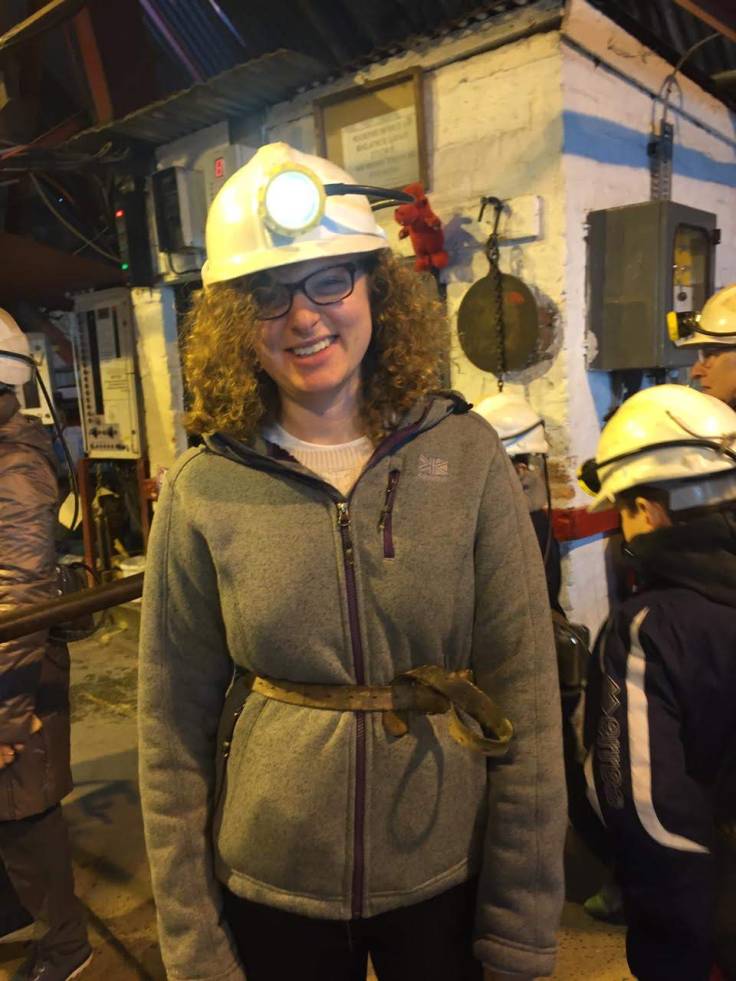 Our tour guide was an ex-miner. His father and grandfather were also miners. Their working conditions were worse than his. Our guide’s grandfather worked 12 hour shifts. They used horses to transport crates of coal along the mine’s floor. These horses would see day light no more than three times a year. When they did their eyes had to be covered so they didn’t get blinded. Children as young as 12 would be given jobs such as opening the doors to ventilate the mine and were ordered to look after the horses.

When Margret Thatcher became prime minister all the mines were nationalised before being closed completely. Our guide and thousands of others protested but eventually lost their jobs. Our guide worked in factories after his carer in the mining industry ceased.

Mining conditions were not favourable, it was a dangerous affair. To begin with candles were used to see. These could react with the methane gas present at any moment to cause lethal explosions. Whats more, dust would settle in the miners lungs causing them various health concerns.

One hour later I was happy as we resurfaced. I couldn’t imagine working 12 hours without seeing daylight. 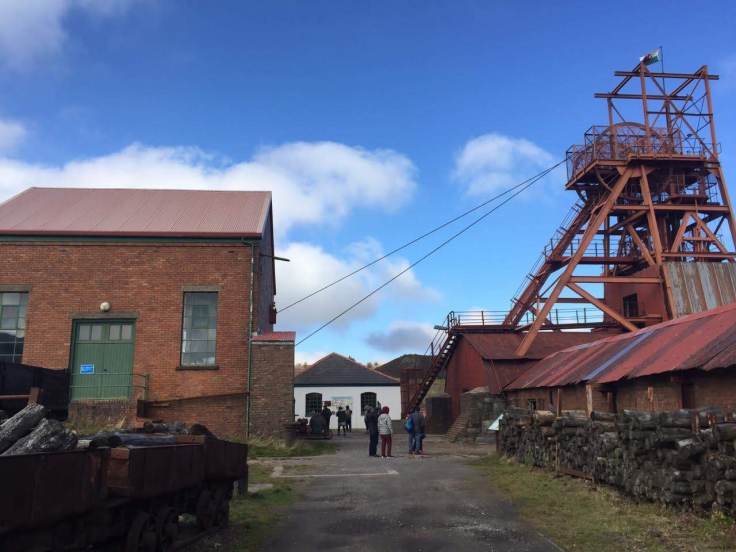 Keen to make the most of sunlight and being outside after being underground it was time to find a hike to go on. Following recommendations we were given we drove to the four waterfalls.

After paying a couple of pounds for parking, we had a quick look at the map. There was a circular walk we could take which passed all four waterfalls – perfect. We began strolling through woodland. The sun shone through the trees, leaving dappled sunlight on the floor.

On reaching the first waterfall we were pleasantly surprised by its beauty. Suddenly, we had the urge to swim. The temperature was pretty low around 10 degrees. There were lots of people around too.

After taking some pictures we found a quiet path along the cliffs. This was much less congested. We found a way down to the river. Holding carefully onto trees and rocks we made it down to the water edge. Dipping my hand in the water a cold shiver reverberated through my body. In a bid to warm up I started doing press-ups and star jumps. This helped. There was only one way to approach swimming. That was to be brave and just do it.

Taking a deep breath I took the plunge. The cold was intense. I felt alive. I yelped before jumping out. My skin felt prickly. I tingled. My toes cramped. I couldn’t feel them. I hurriedly put on some dry clothes and started jogging on the spot like a maniac. This did the trick. I started to slowly warm up. We continued to walk and in no time I was feeling a normal temperature again. To my shock, my feet actually felt warm.

Tucking into a well deserved Snickers bar, I admired the trees around us. Their leaves had fallen. The crunchy sound of them beneath my feet was very satisfying.

Before long we spied another waterfall. This one was even more spectacular than the last. 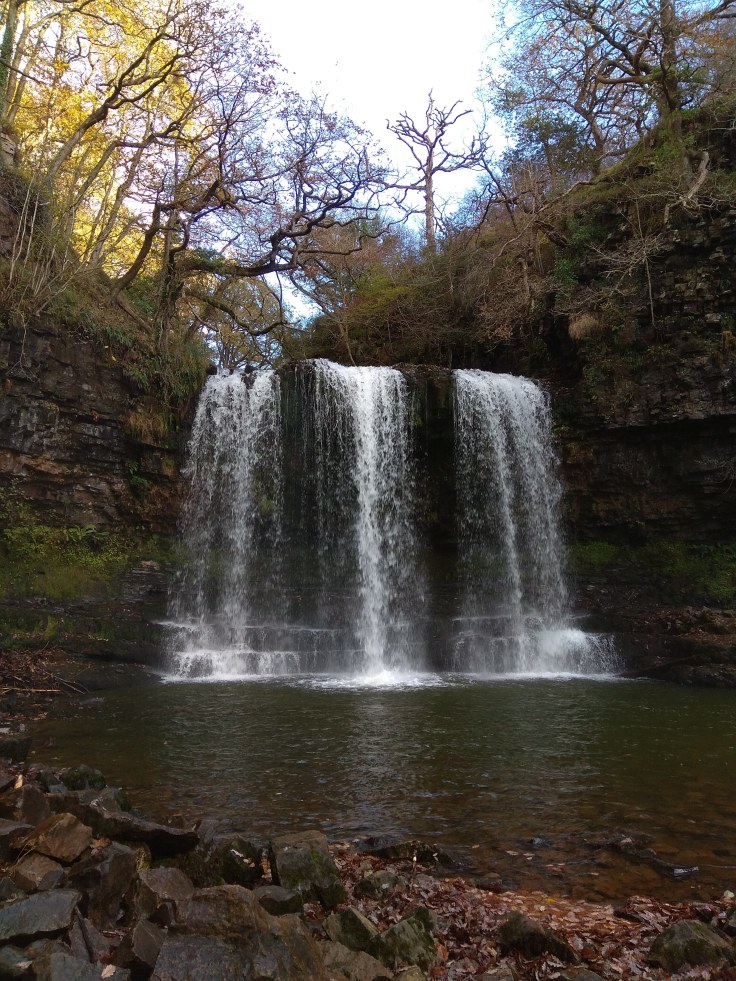 It was possible to walk underneath the waterfall. Standing on the path behind it, I watched the water gush down into the river. The splatter of the water was tranquil. I wanted to stay there forever. Getting a little splashed spurred us on.

The sun was slowly setting. It was the golden hour. The trees looked magnificent.

We reached the car at 4.40pm and set off. While driving we passed Penderyn Distillary  – which was recommended to us. We popped in with 5 minutes to look around before they shut for the day. They also do tours which you can book into online.

Driving away from the town the sun began to set. We pulled over to admire the sky change colour and watch the sun descend behind the horizon. 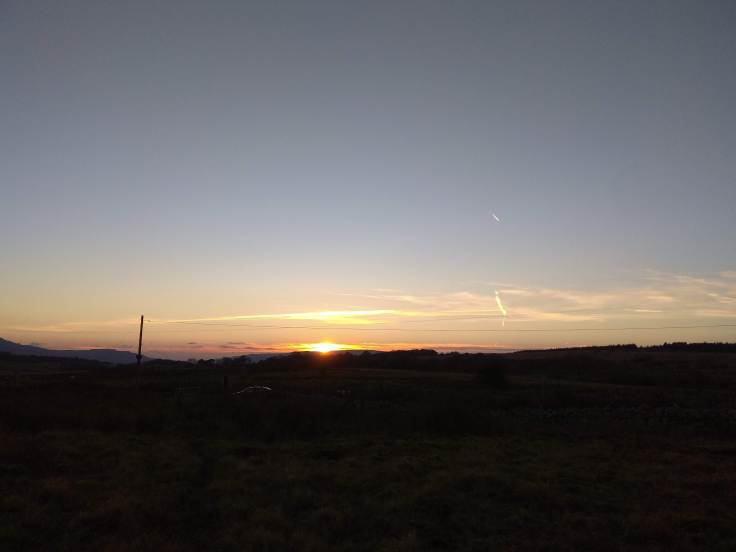 Our final destination for the evening was Swansea. On arrival we were ready for a hearty dinner. We decided to stop at Griffin a cheap bistro pub. We enjoyed a pie and lasagna for the grand total of £10.

We stayed in The Tudor Hotel located on the sea front. For the price, the hotel was fair. We paid £80 for two nights. We shared a bathroom which was never occupied and we had a sea view.