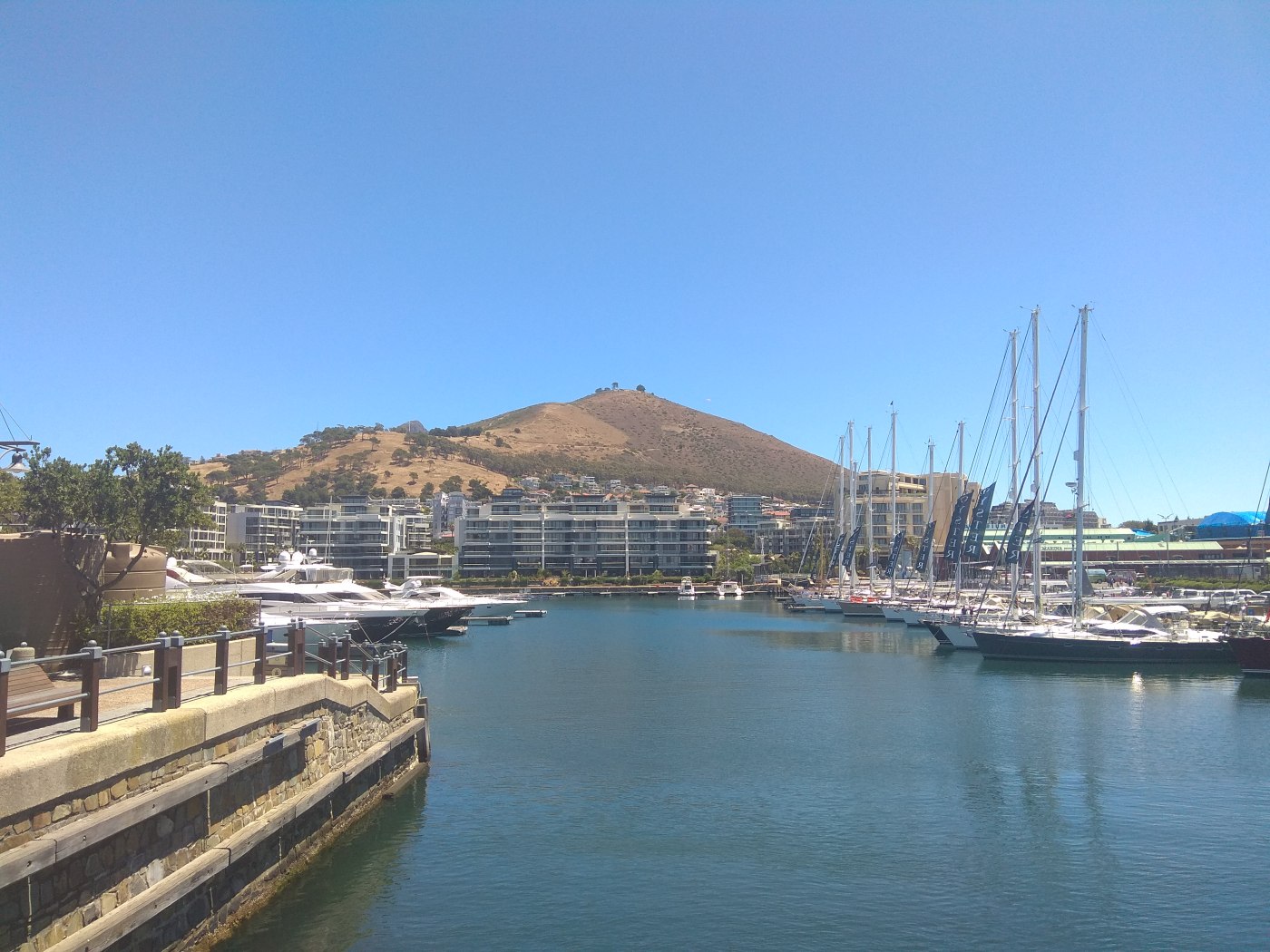 We arrived at Cape Town Airport at 10.30 am meaning we had the whole day ahead of us. First up was finding our hotel – Cape Town Lodge. We went to the e-pick point in the airport, using free WiFi ordered an Uber taxi. This arrived smoothly and we were on our way.

The Uber driver from Zimbabwe was very friendly. He had been living in Cape Town for six years. Finding no jobs in landlocked Zimbabwe, where they don’t have their own currency, Cape Town provided our driver with a higher quality of life. We arrived at our hotel in the city centre 30 minutes later. The journey cost £10.
As we were slightly early for check in we had time to explore Cape Town. Colonised in 1652 by the Dutch the city is home to eclectic buildings, from its modern skyscraper banks to intricate ornate dutch style homes.
We began our walk through the town center, peering into colourful shops and getting used to crossing the busy roads. On pressing the traffic light button a repetitive ticking noise would commence. Then once it was safe to cross a green man flashed up opposite us and the lights sung like birds.
On meandering down high streets we found a market. Wooden masks, vibrant paintings and handicrafts were being sold. A group of gospel singers were belting their hearts out and dancing in the middle.
Later we found the harbour front. Taking a broadwalk we passed gorgeous houses on the waterfront. 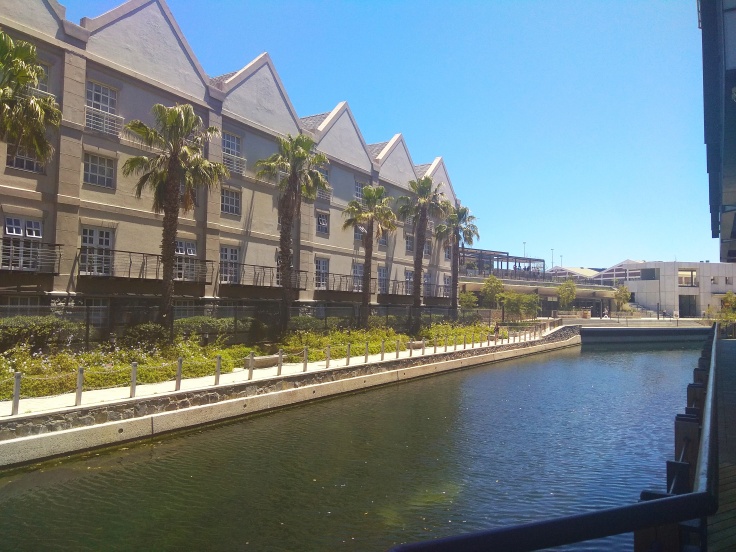 People paddle boarded past us, while others cycled. Turning a corner we found the marina. Numerous expensive looking boats were moored. On a window we saw several for sale. Going for £200,000 we swiftly moved on.
Next we entered the Victoria and Alfred Waterfront area. Created due to South Africa’s rich resources of gold and diamonds the area became a prosperous exporting port. However, in 1858 due to a major storm the area was devastated. The insurance company Lloyds of London refused to pay the bill for the Dutch colonisers.
In 1860 Queen Victoria’s son Alfred arrived in Cape Town. He tipped the first load of stones and began the reconstruction of the port naming it after himself. The port still wasn’t big enough to accommodate all the riches leaving South Africa, so the addition of the Victoria port was added. 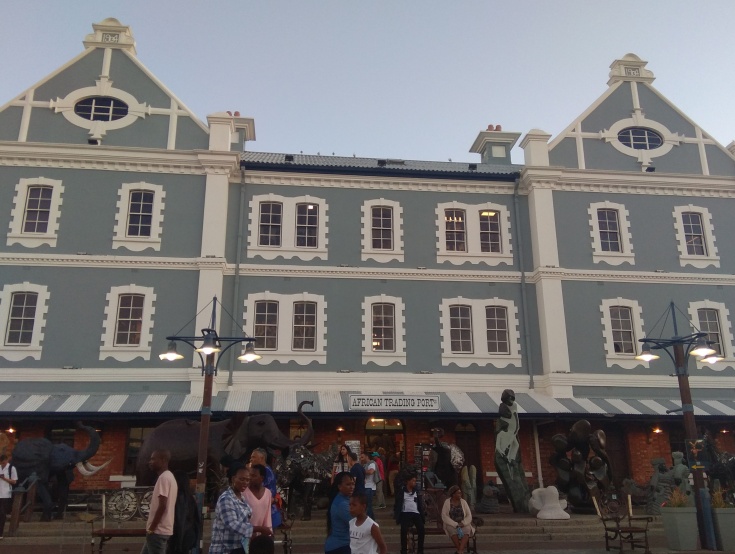 Today the port is home to fancy shops, expensive homes and hosts various events. We walked past the Woof Wopf Project where it was possible to borrow a dog, go for a walk and if you both liked each other you could adopt your new friend.
As the clock struck 2pm we began to flag, it was time to find some caffeine and sugar. We found a cafe overlooking the docks called Shift Espresso Bar. Sipping on an ice-latte and tucking into a delicious cheese cake, we felt much better. The cheesecake was coated with a layer of melted chocolate, its biscuit base was crunchy and flavoured with coconut flakes. The sweet cheese filling dissolved in my mouth. 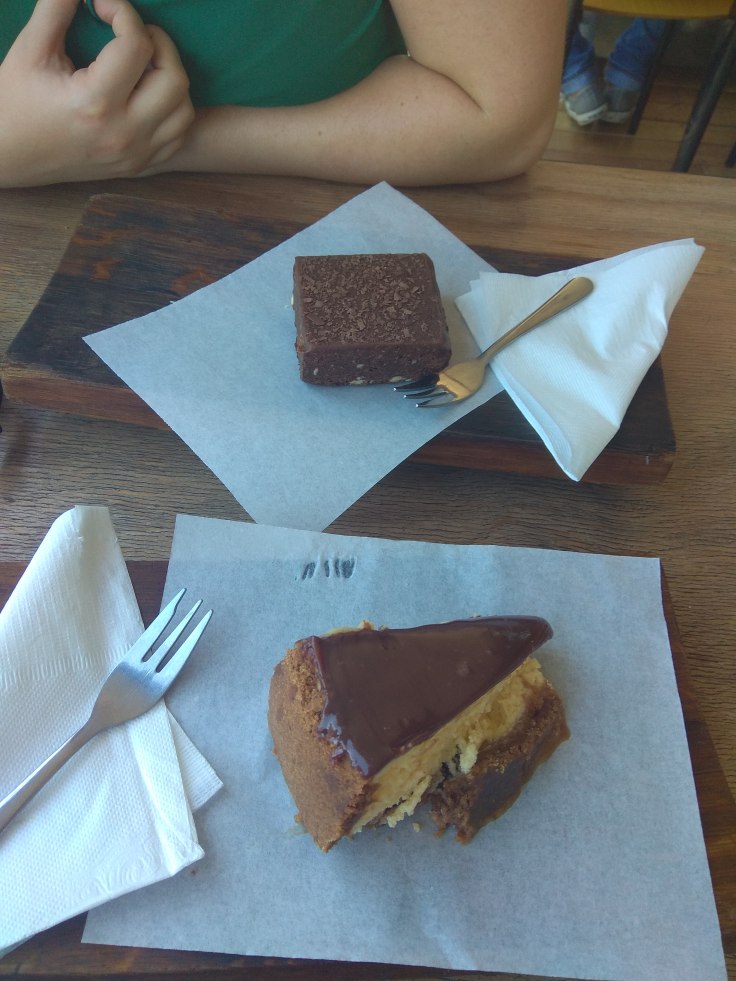 Feeling refreshed we headed back to the hotel for check in. The sugar had given me a tonne of energy that needed to be expelled. Consequently, I hit the hotel gym. It was well kitted out. Although, on the adverts a punch bag was shown in the pictures but it wasn’t present. I brought my boxing gloves for nothing! Nonetheless, I still had a great work out.
Freshening up with a hot shower we were ready for dinner. First we took a picture. 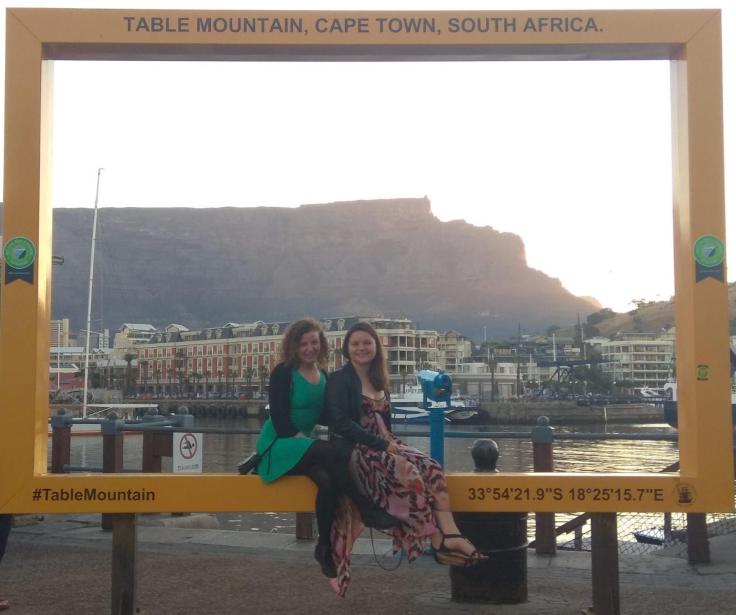 Then, we strolled back to the harbour where we found the food market. Choosing feta, pesto, avocado and tomato wraps we took a pew on a bench overlooking the water and tucked in. They were delicious. Just the light dinner we were after.
We sat for a while watching the sun set behind the mountain backdrop. Infront of us, a hotel in a boat bobbed up and down. Guests were eating dinner and drinking wine on the deck. One lady stood smoking on the lower deck.
We could hear music hum in the distance and the chatter of passersby.

Eventually it was time to move. We headed to a supermarket to pick up some supplies.
Heading back to the hotel in the dark we were armed with our shopping bags.

Feeling ready for a long sleep we turned in for the evening.

3 thoughts on “Day one in south Africa”