White cliffs stood tall in the distance. They jutted out into the light blue sea. Despite being made of chalk, they didn’t look as if they were about to crumble any time soon. They looked still. 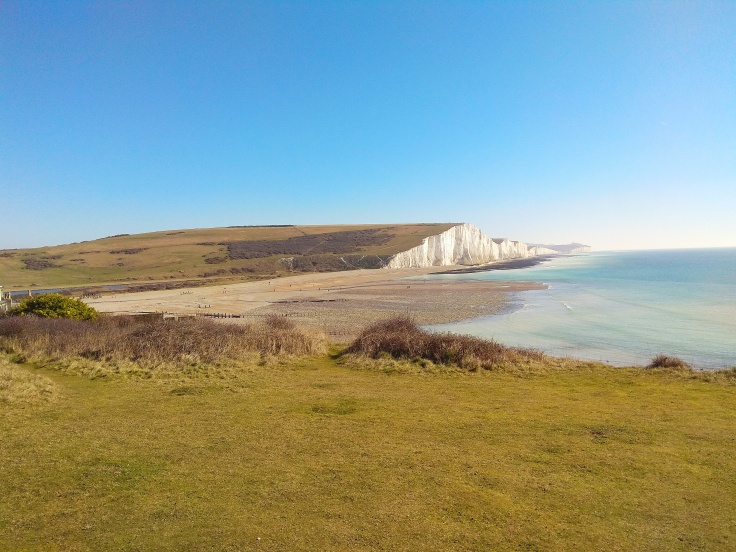 Yet, earlier that morning in the Seaford tourist office the lady on duty warned me to stay well clear of the cliff edges. Last year a section of the walk was shut off due to a catastrophic landslip – 10 m of cliff was lost into the sea. She joked about seeing me on the news being rescued. Hilarious.

I left with a leaflet in hand not overly impressed by the ‘tourist office’, which was simply a counter in the town’s police office building.

I walked past Seaford town Hall, reached the sea front and turned left. Here I walked along the beach for a short while before clambering up a steep path which appeared to be going in the right direction.

Golfers were cheering as they won their games. I hurried past keen not to be hit by a golf ball.

Each hill I mounted, I was greeted with spectacular views. The white cliffs rolled on for what looked like an eternity. The path was easy to follow, it was simply along the coast line. There were a few walkers and a handful of tourists to follow if needed.

I reached a large river which probably could have been crossed as the tide was out. However, I was keen to stick to the official path and complete my 14 miles.

This involved walking inland to Exceat. Here there was a delightful pub – The Cuckmere Inn. The pub garden had wonderful views of the surrounding fields and countryside. Sheep grazed in the distance, while water traveled quietly along the river.

I was eager to continue my hike without stopping too long. So without further hesitation, I crossed the Exceat bridge before heading back towards the sea. There was another bridge to cross signposted: ‘The South Downs Way’. Most of the walk was marked in this way, making it very easy to follow. 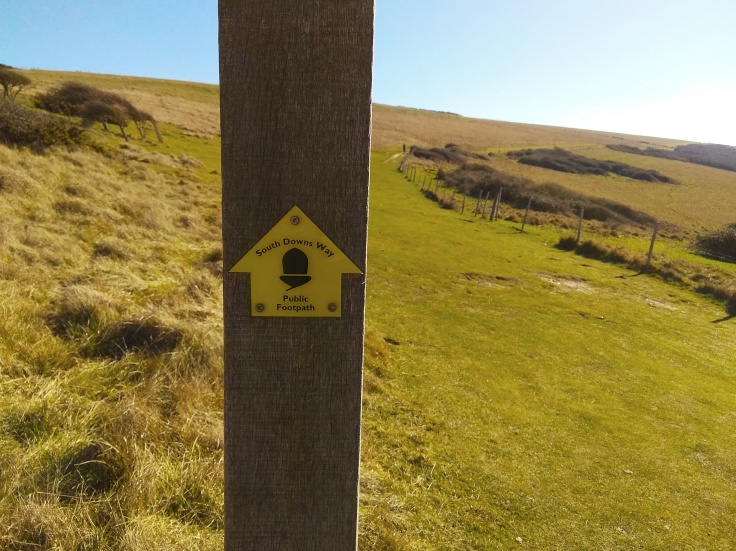 I stopped for a spot of lunch (leftover sweet potato and lentil curry on a bed of pearl barley) . I prefer to take packed lunches as it means I don’t have to rely on finding a suitable restaurant when I get hungry. Plus it is cheaper.

After eating I continued Easterly for a while towards Birling Gap – National Trust land, home to a cafe and delightful shop.

Here I had the chance to descend the cliffs and sit on the beach. Dog owners walked their pets and sat watching them run into the sea. Meanwhile, paddle boarders rode the ferocious waves on surfboards. They waded into the ocean, waited for the perfect wave crest and then carefully balanced on their board, letting the ocean’s energy carry them. When the sea’s power took over, their legs flung into the air and their board bobbed up and down as they submerged into the salty water.

Getting a bit chilly it was time for me to get going once more.

The journey I was making was over The Seven Sisters in the South Downs National Park; a series of cliffs, with numerous peaks and troughs.

I clambered up another steep hill reaching the Belle Tout Lighthouse. Built in 1829 to help mitigate shipwrecks, it was found not to be successful, due to its location. Consequently, it was decommissioned and today is a bed and breakfast.

I passed several memorials from the second world war. Beachy Head was said to be the last sight for many of the aircrew before they were killed. 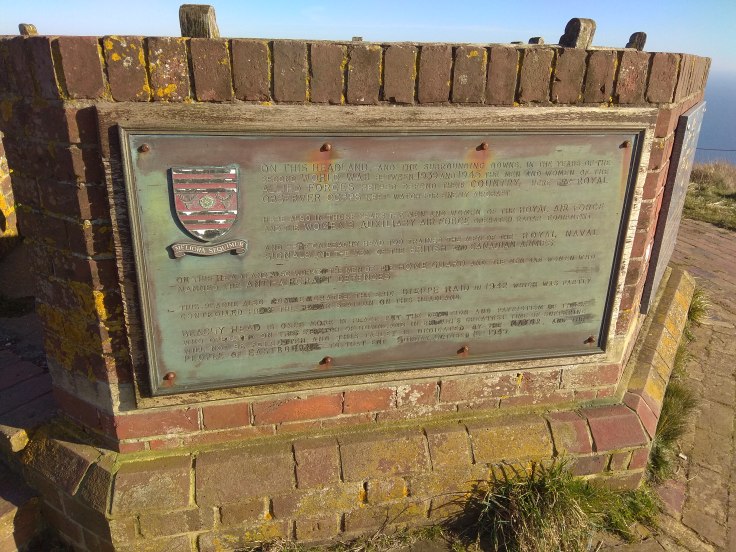 Before long I could see Eastbourne (home to 101,133 with 28% of the population over 65 years old). My journey was coming to an end. The last leg was along Eastbourne seafront. This can be found by walking on the road just past Helen Park and turning right down a steep footpath/road.

The sun was beginning to set, casting a beautiful light across the sea. The sky transitioned to a pinky orange. As I knew I was near the end I gave myself time to sit on the beach once more. It was relatively quiet. Mothers played with their children, while people ran along the promenade. Some cycled and others rollerbladed. 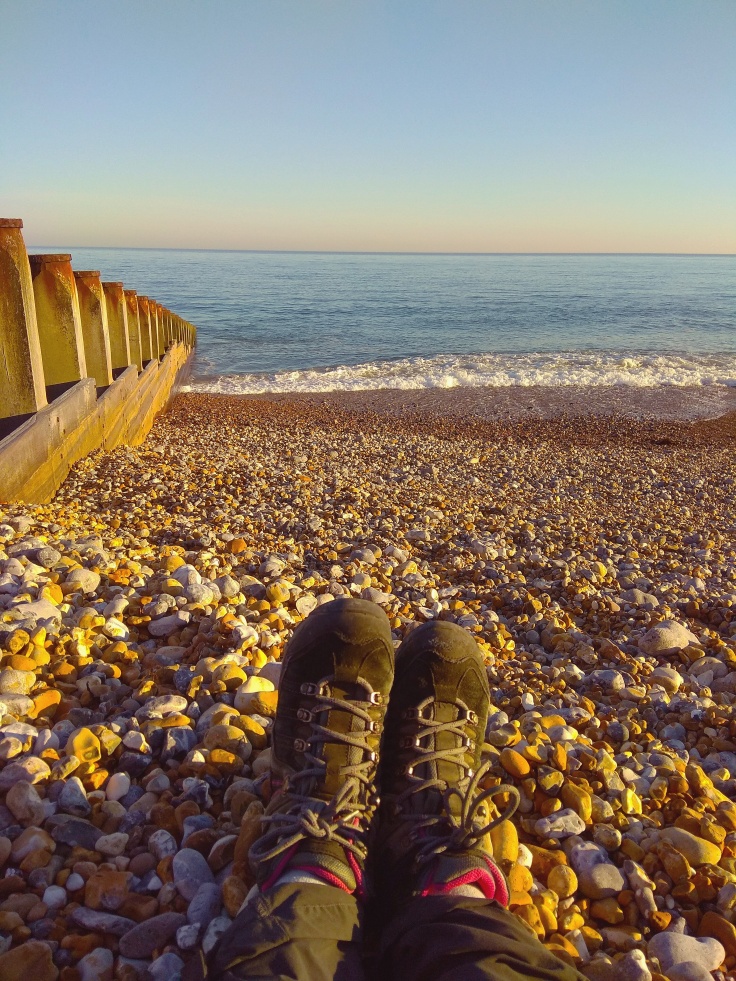 That morning, I left my house in London at 7.30 am – it was safe to say I was knackered. I took the 8.46 am train from Victoria to Lewes. I then changed trains in Lewes and arrived in Seaford at 10.20. This ticket cost £20.20 booked the night before. By the time I mooched around Seaford town, I officially started walking at around 11am. It was around 4pm by the time I was relaxing on Eastbourne beach.

I spent a while there before making it to Eastbourne train station for 6 pm in time for my 6.30pm pre-booked ticket direct to London (costing £5.90).

The walking itself can be done in 5 hours. However, I stopped off on two beaches for a while and explored Eastbourne’s pier. 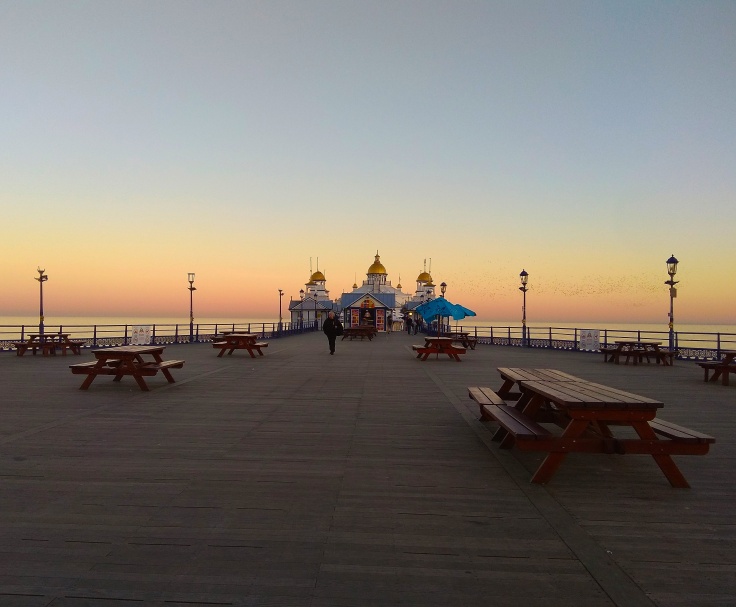 I was home by 9pm. I gave myself 7 hours in the South Downs. It is certainly possible to do this hiking adventure in one day.

Who else has done this hike? Please share tips below. 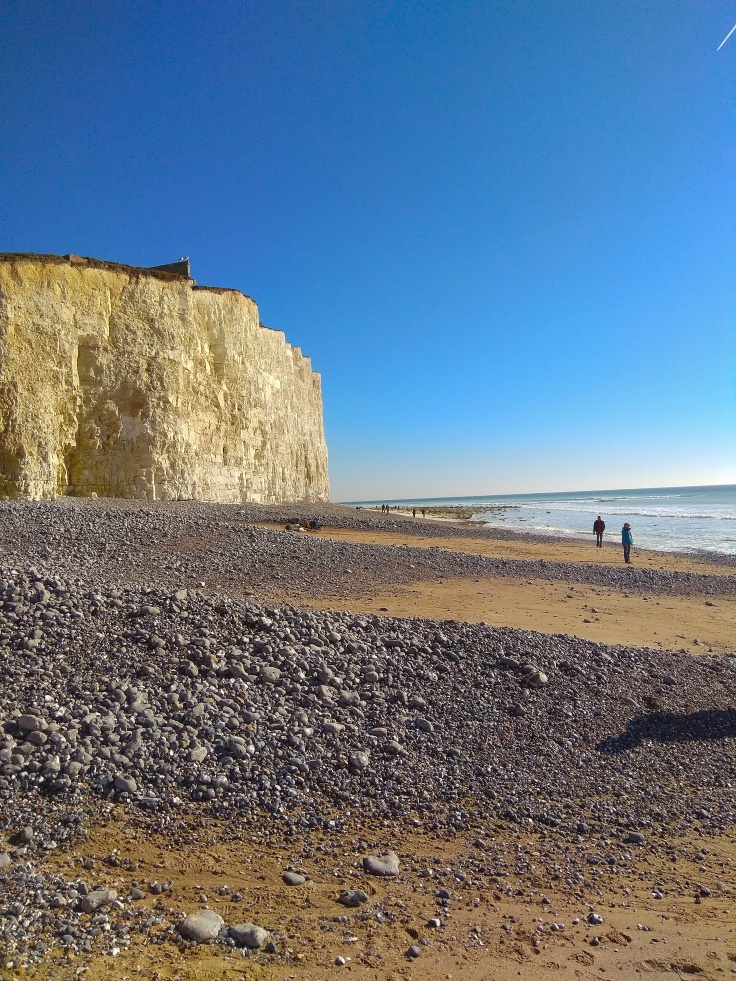