The first night here in the hostel I had to share a room with a rather unsavoury character. She is about 40 years old and smelt horrendous. I thought I could hack it, opened a window, locked up my valuables and fell asleep. However, in the morning I woke up to an awful smell, looked around and saw she wasn’t in the room but had left her scent behind. I went down to breakfast where she was arguing with a poor man about goodness knows what. She started yelling at another guy for using his parents money to travel – even though he had not. She accused people of lying to her and made a fuss about everything. I found out that the other girls in my dorm had asked to move and I hated doing it but asked the receptionist if I could move rooms too. I am now in a much less smelly room. Although, this is an inconvenience having a eccentric, peculiar, crazy character in the hostel, it has enabled the rest of us bond over the situation. We all clubbed together chatting about how rude this lady has been to us all. One guy started ranting about how he thought she was going to do stuff to his food. It was most funny. I do feel sorry for her – she must have some issues and it can’t be nice to have everyone move away from her but she did not do herself any favours.

After sorting the room situation out I went to the beach with a couple of friends. The temperature in San Diego has been 25/30 degrees and it’s meant to be winter. It is a nice change from the cold weather in the grand canyon. The beach here is beautiful. We went swimming ducking under the huge waves. They were pretty powerful knocking you back to the shore.

We strolled along the pier admiring the view and huge pelicans.

In the evening I managed a nice run back to the beach. Later on I joined the group hostel meal cooked by the receptionist. It was yummy and nice to be cooked for. Then we went out to some bars and pubs nearby. We had a great time playing pool, table football and some other strange American game with disks (sort of like bowls but not). I met a few more people from London, which was nice.

Today, I tried surfing for the first time. It was great fun.  I did inhale a lot of salty sea water – all part of the experience. I managed to stand up for a brief second and did a bit of body boarding. For a first attempt I am quiet pleased with my efforts. There are so many pro surfers in San Diego. Lots of physically fit people live here making the most of the sea on their door step. We went to the dog beach too and saw loads of lovely dogs playing in the sea.

Hauling the boards from and to the hostel was quiet a task. 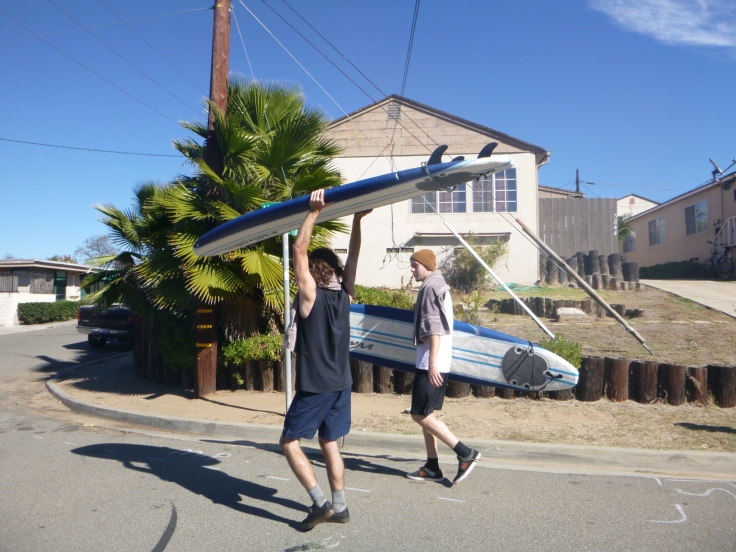 The hostel here is pretty nice, breakfasts tasty and location not too bad. It is in the suburbs but it’s around 20 minutes walking from the beach and there are lots of buses. I will stay here till Thursday and then fly to Mexico.