I fueled up on the scrumptious, complimentary hostel chocolate chip pancakes and was raring to go. My shinny, red, rental bike was delivered to the hostel in the morning and I had the entire day to explore.

I began by biking to Ocean beach. From there I rode south along the coast line. It was a beautifully hot day. Although it’s November the temperature was a scorching 25/30 degrees. The beach was scattered with surfers, dog walkers and people laying in the sun. I passed a university where I saw a group of church goers clasping their bibles, hurriedly walking to the chapel. Other students were driving around campus with surf boards attached to their cars. On the struggle up a steep university hill, the old caretaker in his trolley golf car stopped to offer me a ride, I gratefully declined and carried on up. When I was warned of the hills and distance I thought people were being dramatic. However harsh the inclines they were always worth the effort because shortly after I was usually rewarded with a freewheel downhill section giving me a  refreshing breeze. 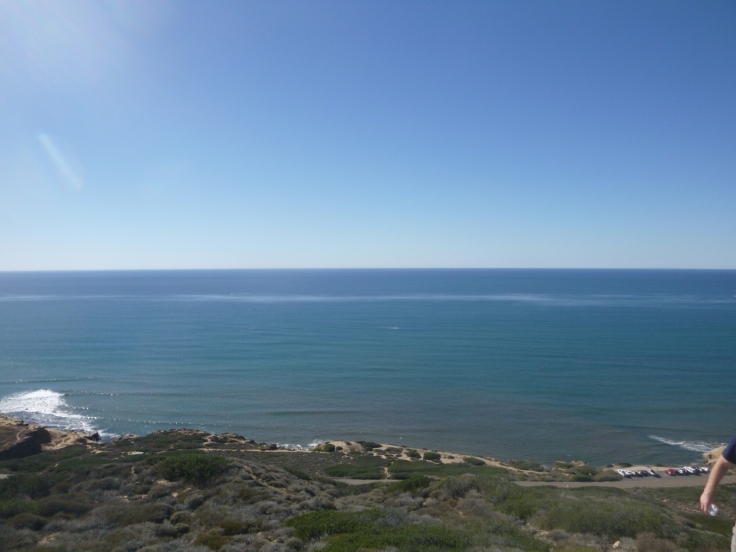 Next, I passed the navy region, where there was a neat, well groomed, symmetrical graveyard. It was very well looked after – sprinklers watered the grass between the tomb stones (there is a draught in California so this astonished me).

After a few more hills I reached the Cabrillo National Monument Park. Here there were fantastic views over San Diego. At the tip there was a lighthouse looking out over the Pacific Ocean. I climbed it but it was not that tall or impressive inside. The views from the cliff edge were much more picturesque. I found a spot in the shade to eat my lunch and people watch. There was a hilarious American family trying to take a family photograph. One son was on the phone to a girlfriend, while the other refused to have his picture taken. The mother was yelling and bossing them about, very frustrated at the situation, while the father was obediently doing as he was told. Eventually after some time a picture was taken. The poor photographer was trying to take the picture for a good five minutes.

I had a quick wonder around Cabrillo before heading off. I was keen to get to the famous Balboa Park. I headed the way I came and planned to cut across to the east. I followed the vague map but had a bit of a struggle when road names were not labeled. Luckily I had my newly bought compass and concluded to just cycle East. When I got nearer to downtown I got the map out again to check. A lady who was on a run saw me staring, puzzled at this map and offered help. I actually did find the road I was on but her directions were much easier and more reassuring. I followed what she said and made it to the airport and coast line. Lots of people were leisurely cycling there. I reached seaport village, which was absolutely packed. Masses of people were walking along the dock, home to numerous yachts. Avoiding pedestrians was a task. There was a large group of people doing a breast cancer walk. It was the last leg of the journey, people at the side were clapping and cheering. When I finally made it out of the group, I attempted to find this park once more. I went though some very unsavoury areas, I was happy to be on the bike and not waking. There are lots of homeless people in San Diego, roaming the streets with trolleys, pushchairs and all their belongings. It saddened me to see people of all ages looking through bins and struggling to survive. The expensive beach houses along the cost contrasted the poor citizens on the outskirts of downtown.

A while later I made it to Balboa park. It was huge. I did not know where to start. It was around 3pm by now and was heaving. People were absolutely everywhere. Musicians were playing instruments along the sides of paths. The architecture looked impressive too. I found a lovely rose garden which was beautiful. The flowers smelt divine.

A cactus garden was also nearby. It homed all kinds of weird and wonderful species. 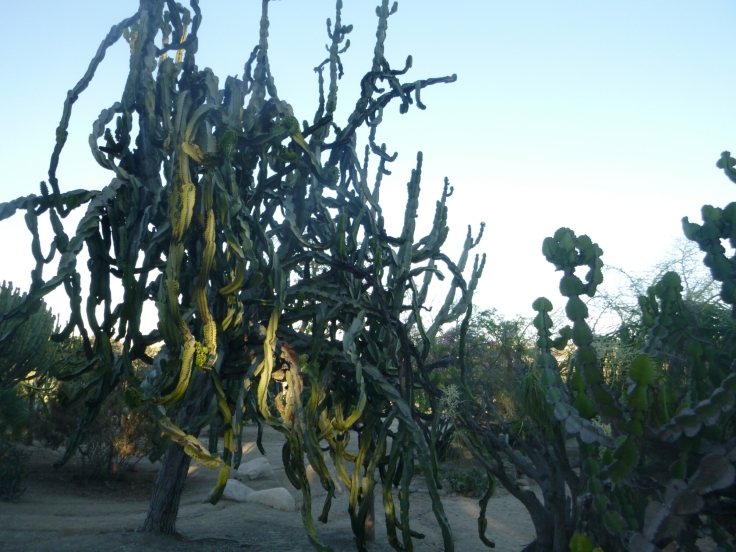 By 4pm I was shattered and wanted to get back before dark so headed off. I didn’t have the patience to map read anymore so set Google maps on my phone. The park had WiFi information points and so I could set up directions. Once you click start you actually don’t need WiFi, just satellite. So I put my phone in my pocket, set it to loud and headed off. Each time I had to make a turn my sat nav spoke to me from my trouser pocket. It worked a treat. I caught sunset along the harbour. The bright orange sun set on the horizon sinking into the Pacific ocean. It was stunning.

I went straight to the supermarket when I got back bought some food and cooked at the hostel. That evening we had a games night, playing gaint jenga. Then we got a bit too into building dominoes with the blocks. It was most fun.